by Perception
Details
I got this kayak used after reading other reviews here, so I'll start by thanking the community. Without you I wouldn't be here.

The Corona is a now discontinued poly boat made between 2002 and 2004. It is 14.5' in length and 23" beam, and features a fixed low touring seat, an aluminum rudder, and two dry holds with two-part covers. The hull is without keel and is unchined.

So, yeah. For a first boat this thing is tippy. I made two short trips on a flat-water reservoir without event, and followed that up with thirty minutes of trying to cowboy back in after rolling on a river. Only took four attempts. A complicating factor is the cockpit length. For tall people the length makes for a tight entry.

That aside, it's a pretty fast kayak. In a single stroke I go faster and much further than the WS Tsunami 120 my wife uses. The dry holds are also a decent size, but none are accessible from within the boat. They seal with a neoprene cover under a hard plastic cover which is held in place by elastic deck lines.

Just finished a day trip in two foot seas and had a blast doing it. If you can find one of these used I can definitely suggest it. 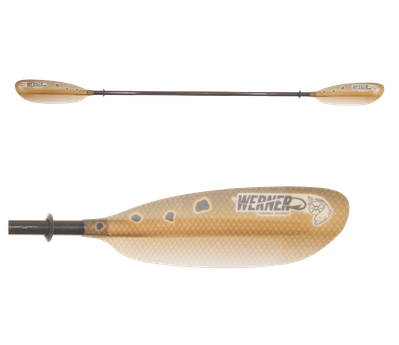 Werner Camano Hooked Trophy in 230cm
Love the ultra light carbon shaft and slight ovoid grip area. Your hand finds it naturally and it prevents twisting. The fiberglass blade is rigid but does flex slightly. The Werner Kaliste would fix that, but at almost twice the cost. That said, this paddle gives a great amount of power for it's lightness.

This paddle is also damn pretty. The scales pattern is a big selling point though it does come in eye catching yellow, orange, red, blue, blue waves, etc so you can definitely find one that suits your particular aesthetic. In short, paddling all day with one of these is a breeze

by Skwoosh
Details
Works great! In ten minutes I emptied four inches of water from my cockpit. It works great for wiping down the kayak after a trip and is machine washable. 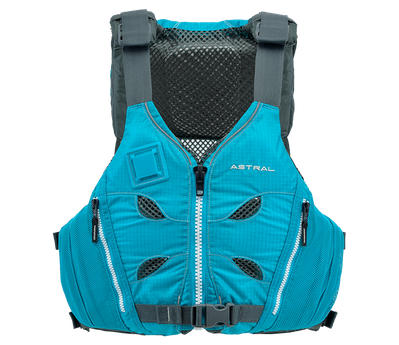 by Astral
Details
Comfortable, buoyant, eye catching, and the half back works great for low touring seats. The attachment point is in a good spot high on the left chest, but the pockets hold next to nothing. Great for a long paddle if you have a deck bag for snacks.

by SealLine
Details
On the upside this bag is made of a thick waterproof material and features a fold-over flap to prevent water from getting to the zipper. It also uses a relatively rigid plastic to keep the bag's domed shape. So paddling in the surf your stuff is within reach and dry.

On the downside, any water that does get to the zipper gets right in and it's likely to get back out. I wish this bag had a scupper valve or some type of weep system to allow water to escape.

Just got into kayaking and needed to pick up a rack to protect the roof of my car. The plan was the Hull-a-Port for me and the Glide and Set for the wife so she can load and unload her own when she wants to go out solo.

These are easy to set up on my Aeroblade bars and the kayak does slide easily on the felt pads and is gripped by the set and go cradle. In addition the friction straps and bow and stern ratchet lines are great.

The think I don't like is that the felt pads only pivot in and out to follow the hull. They do not pivot front and back to maintain in contact. They are also very flexible. This meant that the yak slides on them but when it's all the way on and ready to go, the aft half of the pad isn't touching anything, so the footprint is reduced and the pressure on the hull more localized. The Aeroblade bars prevent any real adjustment of the felt saddles to realign them with the hull.

So, eight of ten. I would give it a ten if the felt pads pivoted lengthwise as well and were more rigid to spread out the load when strapped down.