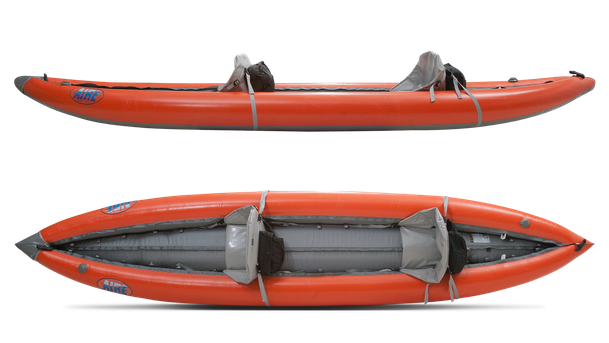 by AIRE
Details
Just purchased my Super Lynx and have only used it on flatwater so far. After reading these reviews, I can say that it tracks a little better than I had expected. I have some experience paddling whitewater boats, which take some adjustments to your paddle stroke to keep straight. I suggest the same is true with the SL. Play with your stroke, blade entry and exit positions, etc and you'll master this thing on flatwater in no time.

I had considered Aire's Tributary line of imported boats, but opted for the Aire brand instead, as I did not care for the quakity and cost-cutting features on friends Tomcats. It is so nice owning something of this quality and you can't beat Aire's warranty. I will be back as soon as I can run her on some class II/III whitewater and update my review.

by Perception
Details
I bought a used Captiva in the Spring of 2008. Took two kayak Safety classes using it, Basic Paddling as well as Self Rescue. Had it out maybe, 45 times last season, paddling in large and small lakes as well as the Detroit River.

Very stable boat, tacks beautifully even without the rudder down. And, with the rudder down it takes away the need to edge constantly to stay on track. Although I hardly ever use it, I'd rather have it and not need it than to need it and not have it, I've got the best of both worlds with this boat.

I would not mind if it was a few pounds lighter, however the weight is not a big concern, as I am able to carry and or lift it without any problem. This is my first kayak, and I don't see having to purchase another for 10 years or so. This may be my one and only boat, very happy with this choice.

by Riot Kayaks
Details
Best whitewater kayak out there. I started as a beginner and now would consider myself as an advanced kayaker. I considered trading up but found the other whitewater kayaks were not as comfortable and have much less control.

The bottom has an unusual feature called traction control and is thicker than most other brands, thus it will take more abuse and last longer. The adjustable seat bottom is a big plus. Not many boats of this size have that. by Hobie
Details
I've owned my Sport for about two years and have loved every minute of it. The Mirage pedal propulsion system is amazingly effective, reliable, easy to install and when you find a comfortable cadence you can just keep on going for ages. The seat is dry, easy to adjust and very comfortable. I leave the rudder down when paddling unless I'm going to be doing some maneuvering. I also purchased the sportsman package and sail kit. Both are well worth the money.

Hobies are expensive, but there's nothing else like them on the water. If you want a craft that can be very versatile and fun to use... this is the one for you.

by Ocean Kayak
Details
After paddling a sit-inside rec boat for several months, I realized I wanted something more. I need a jack of all trades, something for touring and fishing on flat water, but something small enough to take down small shallow fast moving rivers. I was also very concerned about a boat that would handle my 200+ pounds! I had originally considered getting a Drifter, but found the Scupper Pro to be more than capable of handling my weight. I found it VERY stable, yet still pretty nimble with a good amount of glide.
A great boat!

by Hobie
Details
I wanted some outriggers so I could sail my Hobie Adventure in some higher winds. Other than building something yourself, the Hobie SideKicks are about the cheapest kayak outriggers around. I would have preferred the Spring Creek set-up. Their ama's are actually roto-molded with colors nearly matching my Hobie. But they start at $328. $393 if you want the hardware powder-coated. If they were $100 cheaper, I would have gone that route. Instead, I ended up buying the SideKicks for $132.

The installation was challenging with the Adventure, as both access hatches were just a little to far from the mounting location I wanted. I did not use the included well-nuts, as I have read nothing but bad news on the forums, regarding them pulling out of the hull. I used stainless steel T-nuts in teak strips inside the hull.

The SideKick engineering is simple. The ama's have three height adjustments, which work the same as taking a two-piece paddle apart. Just push in the button and spin the aka's to the desired position. I'm not sure how durable the inflatable ama's will be. They are just heavy vinyl. It would be nice if they had a nylon outer layer. A patch kit is included.

SideKicks are a must if you want to sail or stand while you fish. They aren't pretty, but they work well enough for me. by Hobie
Details
I had long wanted a Hobie Mirage kayak. I've owned four kayaks previously; an 11' rec boat and 3 sea kayaks from 16 to 17 feet in length. When I decided to buy a Mirage, I knew that either the Revolution or Adventure were the models I wanted, as they were the most like a sea kayak.

If finances would have allowed, I would have purchased the $3,400 Adventure Island; the trimaran sailing version of the Adventure. The Outback looked like a nice boat for fishing but at 33" wide is a tank. I wanted something to get me from point A to point B with as little effort as possible. I just so happened to choose an Adventure.

It has a sleeker shape than the Revo and I'm 6'3", so the extra length is useful. I immediately ordered the Hobie sail kit, turbo fins and sailing rudder. These all give any Hobie Mirage boat the ability to fish, pedal, paddle or sail. The Adventure is the best most versatile kayak on the market! I really can't say enough about Hobie's patented Mirage drive system. For the technical details, see Hobie's web site.

With the Mirage drive you use very little effort to get up to and maintain cruising speed. I can only compare it to walking, but you aren't supporting your weight. You can adjust the pitch on the turbo fins, just as an outboard motor would use different pitch props. I had mine about ten turns down from the maximum setting.

I've taken the Adventure out twice so far. On 7 and 10 mile group lake trips. Both groups averaged 2.6 mph on the GPS and it was as easy as a leisurely bike ride around your neighborhood. I had short bursts of over 5 mph, and I think I could have maintained 4 mph on my own.

Storage is adequate, but you should expect that in a 16 foot SOT. The Twist & Stow rudder system looks a little over-complicated compared to a sea kayak rudder, but it seemed to work OK, even with the extra weight of the larger sailing rudder.

The boat is heavy, but no heavier than poly sea kayaks of the same length. My only complaint is the seat. My rear was hurtin’ on the first trip. I added a 3/4" closed-cell foam pad on the bottom cushion the second time out. Problem solved. I still rate it a 10, just because the Mirage drive more than makes up for this shortcoming. I hope to take it out with the Hobie sail kit sometime soon. I'll write up another review of the Adventure as a sailing kayak.

by Current Designs Kayaks
Details
I got a smokin’ deal on a used 2001 pre-GT Storm a couple months ago. I have owned two other poly touring kayaks; an Aquaterra Chinook, Dagger Magellan and currently own a Prijon Kodiak.

At first I thought that using a lever to raise and lower the rudder was a funky idea. Once I got it adjusted, it was great. My Dagger had the best hatches of any kayak I've owned, but the Storm's hatches are a close second. They are watertight and easy to use.

I ultimately came to the conclusion that I really only needed one 17 foot poly boat. I had to decide which one would sell. The Storm is a prettier boat, I like the hatches better and it has a tad more knee room. The Kodiak is made from a superior polyethylene, it has gas-pedal type foot braces. The seat and knee braces are adjustable and the seat is more comfortable. So I kept the Kodiak and sold the Storm. It was a tough decision. Both kayaks are great poly boats.

I would recommend the CD Storm to any skill level paddler. 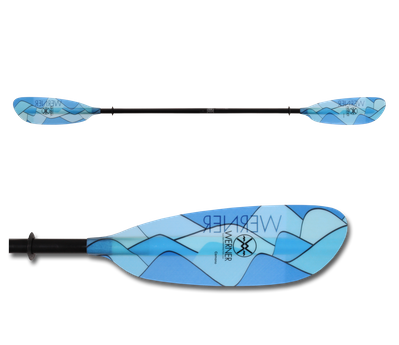 The paddle is everything I had hoped for...

I've accumulated a few paddles over the past year. A Nimbus Auk, a Bending Branches Slice and an Aqua Bound Seaquel. I had a couple gripes abound the first two. The Nimbus had a feel to it that I can only describe as cavitation. The BB had the same sensation that you get when you hold a wooden ruler over the edge of a table and give it a *thunk*. The Seaquel is only used for small rivers and I wanted a higher quality paddle for use in larger rivers and lakes. I had lusted after a full-carbon Werner, but it was not in my budget. I found 2008 Camano's on closeout at O2 Gear Shop. It was a deal too good to pass up. Only 2 ounces more than the full carbon version and much cheaper. The paddle is everything I had hoped for. I don't get ant weird sensations from it and don't even know it's in my hands for the most part. Well done Werner.

by Prijon Kayaks
Details
I picked up a Kodiak a couple months ago. I had previously owned a Dagger Magellan 16.5, but found it a little too confining for my feet when using the rudder pedals. I have no such problem with the Kodiak. It's larger, but doesn't feel or handle like a big boat. It's stable, but not a barge. The gas-pedal type foot braces are amazing. All boats should adopt them. The bungee nets on the decks are handier than I thought they would be. With only two 1/4" neo pads (one for each butt cheek), the stock seat bottom is very comfy. I didn't care for the Prijon seat back and that's the only reason I didn't give the Kodiak a 10 rating. I replaced it with the best back band around, an IR Reggie.

One of my kayaking buddies calls it the Hummer of kayaks. It's big, it's tough, it's not as elegant looking as a composite sea kayak and it can carry a ton. The plastic Prijon uses is incredible. It can take any abuse a paddler could dish out. The plastic has a matte finish that takes some getting used to. I had intended to upgrade to a glass or kevlar boat, but my finances didn't allow it. I am glad I decided on the Prijon. The composite boats may be cooler looking and lighter, but when the going gets tough (and rocky), they can't compete.

I would recommend the Kodiak to any skill level paddler and whatever you do, get the rudder.