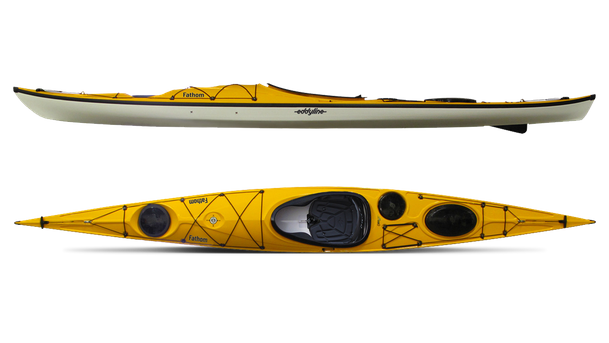 Disclaimer: this is a highly subjective review based on a single demo…

Disclaimer: this is a highly subjective review based on a single demo session. Apply grains of salt as appropriate.

I'm now looking to move up from my WS Tsunami 145 -- a nice, stable transitional touring boat -- to a full-on touring sea kayak. I spent an afternoon this weekend running though a series of demos. Of all of them, the Fathom struck me as the true standout.
Pictures of this new craft don't do it justice... especially regarding that unusual deckline just fore of the cockpit. In reality, it's just a tad higher than most... but has a very nice arc that is conducive to high paddle stroke technique. Well designed and thought out -- especially for the performance-oriented paddler.
Build quality is absolutely first rate. The fit, finish, and outfitting are truly the best of the bunch I looked at on Sunday...by a long shot. The Carbonlite material seems like a great technical advance; it's somewhat thinner than conventional glass layups, which gave me a little pause at first. But I got an indication of its strength and resilience by the way the dock manager and I were tossing the boat around on land. (He did it on purpose to prove the point...because I asked.) He noted that a lot of people had used that particular boat...and then asked me to look at the condition of the hull. Barely any wear at all. The finish still looked brand new. I, for one, really like the idea of a relatively carefree material with the ruggedness of poly (but without the "fuzz" factor that sets in on plastics) and the lightness and looks of composite. Seems like Eddyline has gotten that combination down right. Very impressive.
On the water, the Fathom seemed graceful, responsive, and certainly fast enough for me. (OK...compared to the Tsunami 145, nearly any real touring kayak would seem fast...but this was a dramatic difference.) I was especially impressed by how well it tracked with or without the skeg...and then how well it turned when put on edge. Let's hear it for moderate rocker and hard-chines; there's some classic Greenland character in the Fathom, and thats another major point for performance-oriented paddlers.
The stability of the Fathom really surprised me. Coming from the Tsunami's 24.5 inch beam to the 22 inch beam of the Fathom, I expected to put on quite a ridiculous show on the water. Nothing of the sort happened -- the Fathom proved to have comfortable primary stability that just let me smoothly roll it on edge with very reliable secondary stability. I didn't test it fully because I never found the limit, but I was impressed.
My one concern: that distinctive high foredeck sure seems like it would catch the wind. However, it drops steeply away toward the bow...while the aft deck is nice and low. I don't think that weathercocking would be much of an issue with the Fathom.

I'm rating the Fathom a "9" out of 10 because I really haven't put it though its full paces. However, when I compare it to all the other kayaks I've tried in its class, I'm pretty confident that this would eventually be a "10" for me.
Give this kayak a try. I think you'll be impressed too. 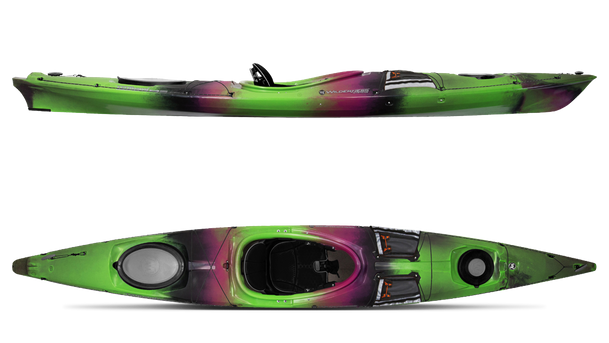 by Wilderness Systems
Details
We have two WS Tsunami 145's with rudders. Red and Orange for high visibility. Before purchasing these, we'd been kayaking on SOTs in Hawaii and in traditional yaks like these at home here in New England. We bought these on the recommendation of our son (who worked at a major outdoor equipment retailer, and could have gotten similar discounts on Perceptions, Esky's, P&H, and a whole range of major brands on special order.) His reasoning has stood the test of experience:

1) They are remarkably stable even in the ocean chop we sometimes find ourselves. Haven't been tossed yet (Yeah, I've come close....

2) The move fairly easily -- speedy enough for us, even if it takes a little effort to keep up with skinnier, composite hulled craft. They hold their own.

3) They are amazingly roomy -- tons of room and storage for camping. With the right equipment we can head out for up to a week or so. On overnights, we can pack everything but the car.

3) The hull is quite rigid for a poly design. I don't know what the previous poster is talking about when he or she says that he found the hulls "soft." Doesn't make sense or match my comparisons at all. These yaks track well and make a sleek imprint on the water...and did I mention that they seem quite speedy...

4)As noted by nearly every other poster, the Wilderness Systems seating design is the most comfortable and adjustable available. It's a huge advantage over the other brands. I particularly like the thigh supports and the ability to fit my very average 5'9 170 Lb body perfectly to the roomy cockpit. It provides the best "hip" response of any seating system I've tried, and I simply do not get lower body fatigue when I'm out.

1)Yeah, the standard high-quality poly hull is a tad weighty. Hasn't been a problem for me to hoist up on top of my van though. (Built up the lower back and biceps last summer....

2)The rudder foot controls can be a little finicky - you have to find the sweet spot for positioning them to your legs in order to keep them them gliding smoothly. Once you get used to it, it's like magic, however.

This isn't a true sea kayak...and its not meant to be. That said, its taken me comfortably and safely out on the cold, open ocean in variety of conditions...and it moves like a high performance tourer in the bays and estuaries.

Verdict: outstanding for its intended light-touring purposes, quite functional for some heavy touring gigs, and simple fun to paddle.