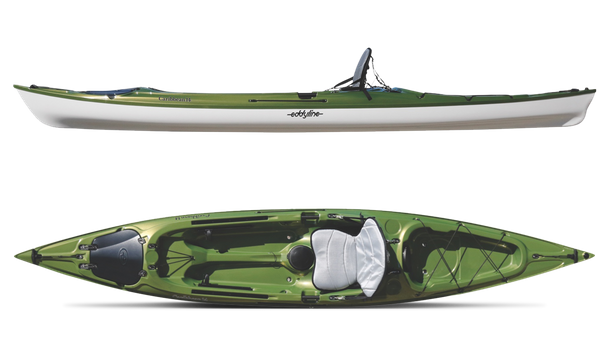 Overall this is still the best kayak I have ever owned...

My Eddyline Caribbean 14 angler version was purchased in June of 2016. I had owned 2 previous 2013 models. There are several things you will notice immediately with the new style Caribbean:

First, the cloud seat is a big upgrade over the original seat. It is more padded and easier to attach.
Second, the new liner below the seat prevents the seat from squeaking.
Third, the redesigned cockpit offers more leg room and a storage bucket area between your legs.
Fourth, the redesigned rear cargo area will allow you more crate / storage options.
Fifth, the dull finish of the hull on the green model seems to stay cleaner and show less scratches.
Sixth, the new foot peg system adjusts easier.
Seventh, the front hatch is easily accessible on the water.
Eighth, By far the lightest best sot fishing kayak I have ever owned.
Ninth, The best secondary stability of any sot kayak I have ever owned.

Cons:
1) The below deck storage area that used to be accessed between your legs so you could stow
rods below deck on surf launches is gone. (replaced with a gear bucket)
2) The cloud seat is heavy and soaks up water like a sponge. Seats are a personal thing.
Hard to find one that fits all. Kind of like a paddle? But it is nice to have options.
3) The new foot pegs are too small and don't lock into place. They keep sliding when you put
pressure on them.
4) The front hatch still leaks a good amount of water in rough seas.
5) They could offer a battery bag for fish finders.
6) Maybe an area could be designed for mounting a transducer for a fish finder to be in the water?

Overall this is still the best kayak I have ever owned. If you like to paddle you will not be disappointed. I could see Eddyline offering a redesigned Angler version in the future. The old center console cover was not a great design on the 2013 model. But I do think they could angle the opening where the storage bucket between your legs goes on the new model so you could store rods below deck. Also after I called Eddyline they sent me the old style footpegs and rails to correct the problem with my new system. Great company. Great people to work with. Respond to most inquiries the same day. Made in America :) and made great.