by SealLine
Details
Over the years I acquired quite an assortment of Cascade Designs transparent dry bags, both the clear and the amber types, ranging from 5-liter to 30-liter ones. I liked them because I could see the contents without opening them, and because they sealed quite well. I used them a lot, and over time the bags began to develop cracks along the upper fold lines where the sealing strips are located, pretty much as described by the earlier reviewer. Along with the clear bags I have used an assortment of Seal Line Baja dry bags, which are also made by Cascade Designs and are apparently fabricated from a different type of plastic; I have never had any problems with the Baja bags. I contacted a customer service representative who seemed genuinely interested in having me return the clear bags so their technical people could examine them. So, I sent back nine of the clear bags. Within a couple of weeks Cascade Designs replaced all nine clear bags with Baja bags. Talk about a company standing behind its products! I was impressed.

I cannot say that the transparent bags were defective, but the Baja bags are more durable, in my experience. I would give the clear bags an 8, but Cascade Design's customer service merits a solid 10, so let's average the two and give them a ranking of 9 overall. 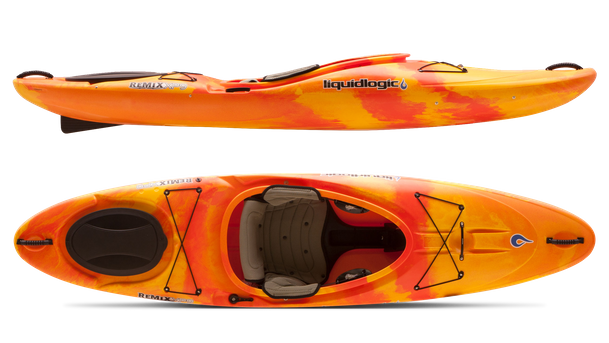 Expensive boat with several unacceptable design problems. On the plus side, the XP-9 is a very pretty boat, so your photos of it should look real good. The plastic material seems to very durable and strong and should take a lot of punishment. And, you should be able to buy one on the used boat market at bargain basement prices. In fact, I'll sell you mine...

by ProTec
Details
The crucial shock-absorbing material in the top of my ProTec Old School helmet came unglued and fell out after being worn less than ten times. Without that pad the helmet is completely useless and dangerous. I purchased the helmet from NRS on July 2, 2011 and discovered that it had failed July 3, exactly one day after the warranty had expired. Great timing, eh? The ProTec website no longer lists the Old School helmet, so I assume it has been discontinued in the past year, which is a good thing in my opinion.

ProTec makes a lot of helmets for various purposes, not just for kayaking, but I will not buy any of their other helmets for fear that they may use the same worthless glue in their other ones.

This is a followup to my previous review. I decided to…

This is a followup to my previous review.
I decided to contact Jackson Kayak about the problem I had with the Fun Float Bag. They responded immediately and sent me a new bag along with a container for me to send the broken product back to them for their inspection. I was very favorably impressed with Jackson's customer service!

by Jackson Kayak
Details
Conceptually, the Jackson Kayak Fun Float is great, but it has a serious defect, in my opinion. On the plus side, the Fun Float is an inflatable horseshoe-shaped flotation bag that fits behind the kayak seat and wraps around the rear support pillar, completely filling the rear of the Jackson Fun 1 and Fun 1.5 kayaks (and perhaps others also). Fully inflated it provides a huge amount of flotation for these small boats. Because of its design it is much more likely to stay in a flooded boat than more traditional flotation bags that slide in beside the pillar.

On the negative side, however, the rigid plastic inflation tube into which one blows air to fill the bag is easily broken by routine use. The stiff tube broke off at its insertion point and pulled out of the bag, rendering the product useless. It seems to me that Jackson should redesign the Fun Float and use a flexible inflation tube which would not break off when the bag is inflated. I have tried in vain in the past to get Jackson Kayak to respond regarding product issues, so I didn't waste my time contacting them about this issue.

I give the Jackson Kayak Fun Float a 10 for the concept, but a 1 for durability. It is not cheap, and it should hold up much better than it does. It gets an overall rating of 4 from me.

by Phillips Environmental Products
Details
All river runners who make overnight trips where toilet facilities are not available should bring a waste management system with them to pack out human waste. There is nothing more disgusting and dangerous than the feces that irresponsible campers sometimes leave behind. The PETT Toilet System will make your campsite safe for yourselves as well as those who follow you. On many rivers the most popular campsites are occupied almost every night during the boating season. It only takes a couple of "cat holes" to ruin a campsite for a very long time. For health reasons, more and more river regulatory agencies such as BLM and NPS are requiring paddlers to bring a toilet system with them and to pack out all solid waste. The PETT is approved by most of those agencies. Before making a multi-day trip, however, you should check with the river agency to ascertain which systems are allowed.

The PETT toilet is lightweight, sturdy, compact, and easy to set up. It utilizes "WAG" (waste alleviation and gelling) Bags which can be legally and safely deposited in regular trash receptacles.

I have used my PETT system for four years on river trips involving as many as twelve people. If the WAG Bags have to be transported for more than a couple of days, you should bring a military rocket box or some other container that is absolutely airtight to transport the bags; otherwise, odors will almost certainly pass through the plastic bags. That is the only significant drawback that I have discovered.

Overall the PETT is more user-friendly than systems that have to be flushed out at dump stations. The PETT toilet and privacy tent are available at most river and camping retailers such as Northwest River Supplies, Campmor, and Cabelas. I found that prices vary a lot, so make comparisons before you buy.

by Jetboil
Details
OK, first a disclaimer: I don't own a JetBoil, but I saved myself about a hundred bucks by watching one of my fellow campers trying to use hers on recent three-day river trip. She spent an inordinate amount of time trying to get the igniter to start a fire in the device (and, by the way, it was not a cold weather trip). On a couple of occasions, when the thing did ignite, flames shot out all around the burner and could have injured her had she not been very quick. Considering the high cost of the JetBoil system, its limited cooking applications, and the fact that one can only use special fuel canisters, I'm not buying one of these gadgets.

by Katadyn
Details
Recently our group of 12 people used a variety of water filtration devices on a 14-day Yukon Territory canoe trip. The Katadyn Base Camp proved to be the standout favorite. It was so simple to use and required no pumping. We just filled the 2.5 gallon bag, hung it up and watched it fill the water jugs. Nobody got sick, so I guess it did what is was supposed to do as far as removing the nasties from the water. Our water sources, the Teslin and Yukon Rivers, were fairly clear, so I don't know how well it would filter silty water. Would suggest reading the reviews on Trailspace.com before you buy.

by Sealskinz
Details
If I had a list entitled "The Worst River Gear I've Ever Purchased," I would place Seal Skinz socks and gloves at the top of that list. The gloves leaked the very first time I wore them. The socks took a little longer and lasted through about three wearings. It wasn't a matter of water leaking over the tops. No, it was that the thin waterproof membrane either wore through or disintegrated so that the whole sole of the sock leaked. I called the company to see if anything could be done. Their "solution" was for me to buy another pair. I wouldn't even try to talk my brother-in-law into buying anything made by Seal Skinz! If the rating system would allow me to give them a zero, I would. 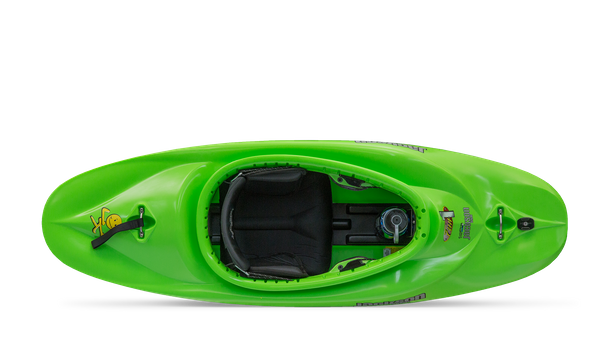 by Jackson Kayak
Details
This is a follow-up to the review of the Jackson Fun 1 kid's kayak that I wrote over two years ago.
Since that earlier review I have purchased another Fun 1, and we have two kayakers (5 and 9 years old) using the boats. The kids now have more than four "user years" of experience paddling these kayaks. We are completely satisfied with the original boat but not nearly so with the newer one. There has been a change in the design of the boat that leads me to lower my rating.

The more recent version of the Fun 1 has a redesigned seat back that is problematic. The manufacturer replaced the ratchet clasp on the seat back (which was an excellent design) with a cord-and-cleat arrangement. Every time our 5-year-old kayaker paddles the boat, the cords pull out of the cleat; this abruptly releases the seatback and allows it to slide rearward into a useless position. I am sure that the manufacturer believed that the new design would be an improvement since it does allow the paddler to quickly adjust the seatback. However, because the cord tends to release and slide back at inopportune times, it is a constant hassle and a safety issue. The older ratchet clasp design was clear1y superior, in my opinion.

The Fun 1 is still an excellent kayak for young kids; however, I would advise buyers to look for an older used boat that has the ratchet clasp on the seatback.