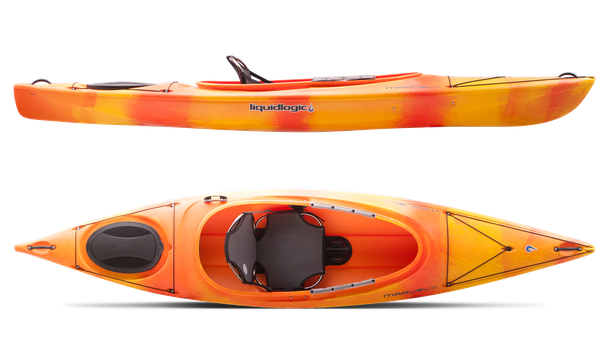 by Liquidlogic Kayaks
Details
After doing as much research as possible on the Marvel 12 I finally went with my gut (and my rear after sitting in that seat) and bought a 2010 demo model from a local paddle shop last week. I never write these kinds of reviews but found it frustrating to find so little info on this Kayak, so I am trying to be part of the solution!

Obviously out of the gate the seat is VERY comfortable; I took it out on its maiden voyage Sunday. We put in on the Ohio River and paddled about 500 yards to a feeder creek and paddled upstream from there about 1 mile before it dried up. A short trip but at least I was able to get a better feel in some different conditions, the river was running fast and tracking was very straight even with some large waves stirred up by a coal barge.

I originally set the seat up in the far back position, I am 6'3" 240# and was looking for the extra leg room. I put my 5 year old boy in the dry hatch in the back and he claimed to be plenty comfortable as we cruised around. Because of the extra weight in the back of the boat (he’s about 45 pounds) the bow was riding pretty high so we pulled over and I moved the seat to its standard position (after stopping for a little snack and sitting in the chair on the bank, I am going to LOVE this feature when I go on extended trips this fall!). At the standard position with the foot pegs set all the way back I do have a slight bend at my knee (which I know is the way it’s supposed to be). Only downside with that is because of the extra large "easy foot" pegs I could see where it will be difficult to stretch out my legs past the pegs on longer paddles. Once I was in the standard position the bow came down nicely and tracking (which already was at least average) became even better.

So first impressions a very comfortable and surprisingly nimble ride, I’ve ordered the spray skirt and will post an updated review in a few months after I get out for some extended trips.