If you paddle with others you should be thinking of ways to utilize the members of your group whenever possible, especially during capsize recoveries. During traditional assisted recovery techniques, the person assisting either stabilized the kayak or helped lift the kayak to drain water. It is sad to say, but I have witnessed assisted recoveries where it was evident that the assister could have used some help and the rest of the group just watched from their kayaks not thinking about how they could have helped.

I am also sorry to say there are still kayak instructors who neglect teaching the "utilizing the group" concept to their students. The standard class curriculum was first established with the assumption you had only two or three in the group. Most classes just teach assisted recoveries for two, which is important to do. If you can perform an assisted recovery with the minimum amount of assets, then having more will be easier. However, the part that usually gets passed over in classes is the "having more part". Most folks will only use what they have been taught. Therefore, it behooves us to spread the word on utilizing the group whenever possible.

Let's look at a few ways to better utilize the group instead of just having one person assisting.

Since the hardest part of a recovery for the person in the water is climbing back onto their kayak, let's use the second helper to ease that burden. The first helper is stabilizing the kayak, which also gives a stable platform for the second helper to rest upon without fear of capsize. With the second helper feeling secure, they can focus on pulling the swimmer onto the deck of the stable kayak. The helper can use any number of grab points to help the person who is climbing on. I personally like grabbing the shoulder of the PFD, because the swimmer can have both their hands free to do what they need to do. Being pulled up onto the deck by their PFD means the swimmer needs less of their own strength to climb up. This could be very useful when dealing with tired or hypothermic swimmers. 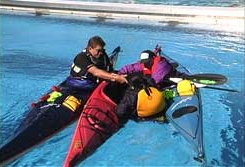 If the paddler in the water chooses to re-enter their cockpit from between the boats with the feet first method, then the second helper could reach across and grab a hand or a PFD. Even though I have very long arms (being so tall), I recommend grabbing the swimmer's forearm instead of the PFD. I find it is easier for most people to use the forearm grab because the PFD on the swimmer is pretty far out of reach for most people.

As before, the kayak being stabilized is a great platform on which to rest. This gives the second paddler a chance to lean and reach as far as they want without concern of capsizing, as long as they are resting on the secure boat.

When I grab the forearm of the swimmer, I find the swimmer gets more leverage when I reach across and grab the arm farthest away from me. In this picture, my right hand is grabbing the swimmer's right forearm. The wrist to wrist grab seems more secure than just a handshake grip.

Even though I recommend the wrist to wrist grab, it doesn't mean you cannot help by grabbing the PFD when the swimmer climbs in from between the boats. To demonstrate this, we have my lovely wife Hadley (5'3" tall) reaching across and grabbing Mike's PFD to help him get into his cockpit.

You will notice Hadley had to move closer to him, than I was when I used the forearm grab. I used my outside arm to grab the swimmer's outside arm. In this case Hadley is using her inside arm to the closest shoulder portion of the swimmer's PFD. As Mike tries to slide into his kayak Hadley adds that little extra pull to make it easier for him. 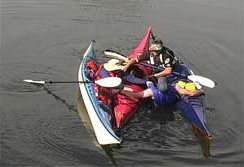 You will also notice that certain boat orientations are more useful for helping depending on what you are trying to accomplish. In general, if you come in facing opposite to the kayak you will be next to, you will be in a good position to help. If you look at the pictures you see that the second helper's boat is bow to stern of the stabilized kayak when the swimmer is coming up between the kayaks. If the swimmer is coming up over the back side of their kayak, the second helper's kayak is bow to stern to the first helper's kayak. As a helper you want to be in a position that will give you the best leverage. That is why it so important to practice these different configurations before you need it so you don't waste time when time is important. 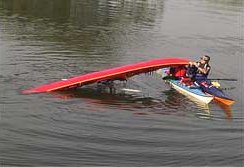 I have often seen others watch while one person struggles to try and drain the water out of a kayak. This is a perfect time to get others involved. Two people could be lifting the kayak instead of one. If need be, a third helper could also get involved. These extra helpers are especially useful when trying to drain water from a double kayak.

I would suggest that you try different boat configurations with your partners to see which ones you like best. In this example, Hadley and I are facing the same direction. However, we could also be facing each other, which would have one of us on each side of the kayak being drained. Having the kayak cradled between the two helpers may feel more secure for you and your partner. You won't know until you try.

The second helper could also be there to stabilize the first helper's kayak so the first helper doesn't capsize when trying to break the seal created by the cockpit and the water.

When it comes time to pump the water out of a kayak why not use additional pumps. Extra hands usually means extra pumps if everyone is properly prepared. As a side note I believe there should be a paddle float and a pump for every paddler not just every boat. That means there are two pumps and paddle floats per double. 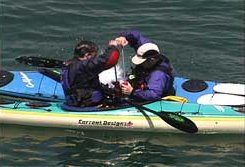 In this picture we have the person pumping out their own kayak and the helper who usually just stabilizes also pumping. Notice the helper is resting on the flooded kayak with their arm over the deck. This allows him to stabilize the flooded kayak and also use his pump so there are two pumps at work. Logic would say it would take half as long to pump out the kayak.

Imagine if a second helper were to come along the other side of the kayak and add their pump to to the process. I like to tell my students to think about having pump parties when you have to pump instead of draining a kayak.

These are just a few of the ways in which extra paddlers can make the recovery process easier and more importantly "faster." Remember, one of our goals is to minimize exposure to the elements.

I am sure there are many other ways extra hands can be helpful. Discuss the concept with your paddling partners and see if you can come up with others. 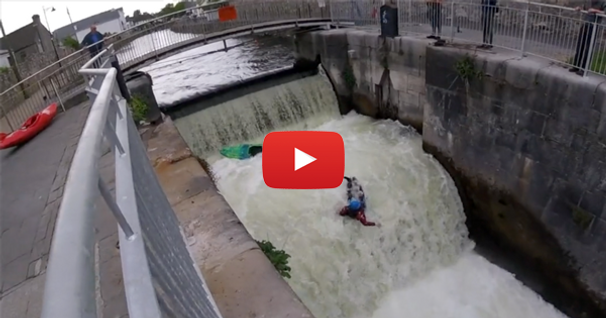 Whitewater kayaking can be intense and dangerous. Check out Kayak Session's winner for the best…

Sit-On-Tops (SOT's) are one of the many categories of boats that fall in the realm of paddle craft. As… 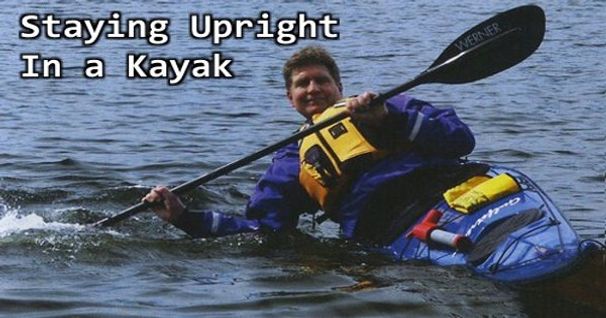 Staying Upright in a Kayak

This article was inspired by the DVD, "USK's Bracing Clinic -The Art Of Staying Upright." The…