A tourist approached a charter pilot friend of mine one summer day on Kodiak Island. He was inquiring about the fabulous photographs of puffins that appeared on the cover of the company brochure. 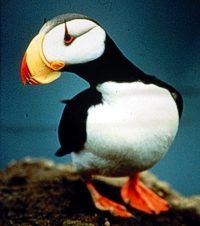 "Can you take me to see these birds?" the man inquired. "We certainly can!" responded my friend confidently. "What's the cost of the flight?" asked the man excitedly. "$350 for three hours in the air, guaranteed sightings." "You can take me to see these birds for only $350!" the man asked incredulously. "Of course I can, no problem!" re-affirmed my friend. "Well, that's incredible," said the man. "You see, this is a photo of Atlantic puffins, not Pacific puffins. We'll have to fly all the way to Nova Scotia to see this species!"

Needless to say, my friend was speechless.

Two lessons can be gleaned from this episode:

1.    Don't trust your state's tourism photo file to always have the correct photo of something

2.    When in Kodiak, a front row seat to viewing puffins is only a kayak cockpit away!

Often referred to as "sea parrots" the two species of puffins common to the North Pacific coastline (that includes Kodiak Island) are the tufted and horned puffins. With wings barely longer than a penguin's, at least puffins can use theirs to fly - barely. Their best efforts are towards swimming where those short wings are super efficient for fast swimming and quick turning; a perfect combination for preying on needle fish (about the size and shape of a ball point pen).

For kayakers, the biggest thrill of a paddle is to come upon a cliff-top colony of either the all black-horned Puffin with its yellow tuft of feathery eyebrow swept back from its upper eyelid, or the white breast of the horned Puffin with its characteristic "horn" of feathers extended vertically above its eye. Both have yellow, parrot-like bills with darker striations perpendicular from the base of the bill (the Atlantic Puffin's bands are much more distinctive and colorful).

Paddlers must approach a Puffin rookery very stealthlike because Puffins will spook at the slightest sound or commotion. They often erupt out of their dens (long, narrow tunnels burrowed into the soil just below the root line of grasses growing on top of the rocky cliffs along the coastal waters of Alaska). Since they had previous returned to feast on the latest catch of needlefish, the Puffins tend to be rear-end heavy as they try to arch out over the water on those stubby wings. It's not uncommon to see then slowly descend right down onto the surface of the ocean and scoot along as staccato wing beats slap their wing tips along the water. Sometimes their timing is off, and their load extreme. I once flushed a Puffin from its den only to watch it come straight at me like a captain watches helplessly as a torpedo streaks towards his ship. The bird seemed like it was on automatic pilot as I stared it straight in the eye as it approached.

It dropped down towards the water and eventually skimmed the surface about ten yards from my kayak. It continued on its Kamikaze course as it scooted along the water and right into the side of my bow with a thunk! It bounced back off, cut four or five tight circles through the water, shook its head and dived out of sight never to surface again within my view. 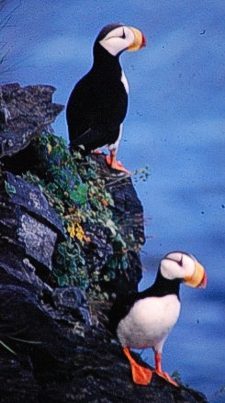 Below the surface, the Puffin hunts the needlefish and captures the fish in its beak. It quickly tucks the squirming fish up against back of its bill and goes after another one. Once its beak is loaded, it returns to its den to feast away and feed its chicks. The Puffin chick remains in the nest (in the narrow den) until it is fully grown. That is why kayakers seldom report seeing Puffin chicks out on the water.

However, one moonless evening I was kayaking with a friend through a channel connecting a bay with an outer island off the City of Kodiak. We noticed a disturbance on an otherwise smooth, glasslike surface, not unlike the current forming a "V" around a bull kelp bulb. As we approached it, we could see that it was not kelp, but something swimming in the water.

I let my boat drift to within about three feet of the unknown swimmer when it suddenly turned and headed straight for my bow. I heard a soft thud as something literally plopped up onto my deck. It began to plod towards me down the center of my deck. I reached up and turned on my headlamp.

A dark, scraggly, and incredibly homely chick stood dripping on my forward deck just a foot away from my coming.  "What the h--!" I said out loud as my partner fixed his beam on the bold critter. "It's a puffin chick!" I exclaimed, as I held the beam on the bird. It looked back at me for a few seconds, then turned sideways and slid down the slope of my peaked deck, and plopped back into the water. It scurried off into the dark brine as if nothing had ever happened. Of course I took no pictures, but the image remains in my mind to this day.

Less often, huge rafts of Puffins can be found miles from shore, usually at the beginning and end of the summer season. Puffins spend the winter at sea; they don't migrate to warmer climes like many other shorebirds do. These rafts can number into the thousands and are a spectacular sight no matter how many times they are seen. 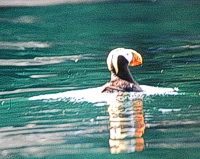 The natives of Alaska's shoreline and islands knew the Puffin well. Not only as a food source, no doubt, but as a resource for making their clothing. One ceremonial robe consisted off sewing a series of splayed out feathery puffin breasts in rows along the wearer's torso. The thick panels of breast feathers were not only attractive, they provided a layer of insulation and protection against wind and precipitation. Many archival photos show village chieftains wearing ceremonial Puffin garments.

It's always a treat to witness the antics of critters while out kayaking. Clearly the Puffin (also sometimes called the "Clown of the Sea") is at the top of most kayakers wish lists of spectacles to experience out on the water. 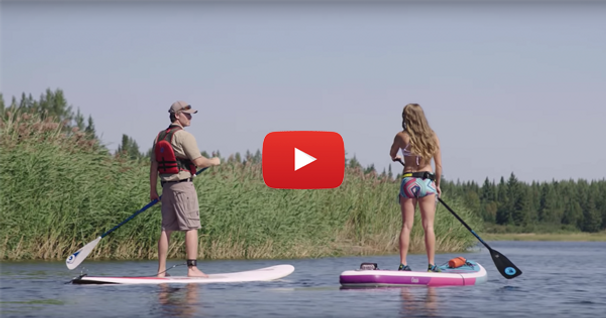 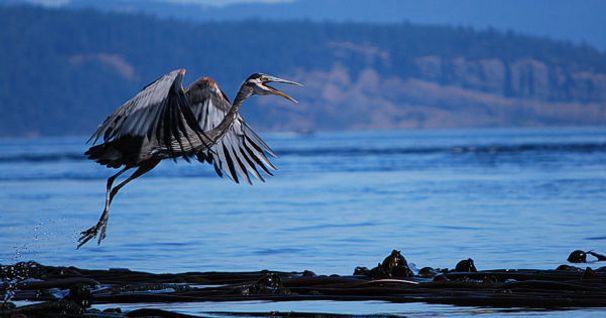