Read and submit reviews for the Solitude.

Read reviews for the Solitude by Wenonah Canoe, Inc. as submitted by your fellow paddlers. All of the reviews are created and written by paddlers like you, so be sure to submit your own review and be part of the community!

What a nice sweet little…

What a nice sweet little boat! Especially good for beginners as it has nice primary stability, as well as lots of secondary stability. I got this for my wife in an ultra light kevlar layup. Under 40 lbs so she can walk it around by herself. And she feels confident out on the water. My Prism was a little too much for her. The speed of the boat is quite good as well. And I like using it in small streams and rivers with lots of twists and turns as it's pretty maneuverable.

For its limited purpose, this…

Submitted by: bobholtzman on 4/29/2016
For its limited purpose, this boat is a 10 -- in fact, it's the favorite *thing* that I own, and I've owned it for well over 20 (30?) years. It's a solo flatwater cruiser and gunkholer, best suited to small water. Shorter than Wenonah's Prism, so it has less capacity and doesn't track quite as well. Nonetheless, it has a very straight, flat bottom (i.e., little to no rocker) and sharp, vertical stems, so its tracking *is* quite good, yet it is short enough to poke around in backwater creeks, aided by ample midbody at the bilge, which allows quicker turns when leaned. (I have a bench seat, which allows kneeling and makes leaning possible. But I believe most came through with a pedestal-mounted tractor seat, which is much less leanable.)

With almost no rocker, it won't turn quickly enough for anything more than an easy Class II -- remember, this is a cruiser. (I'm a Class III boater, but there are different boats for that.) It has plenty of tumblehome for efficient stroke mechanics, and sufficient volume for camp-cruising up to a week or so. It does weathercock some, so crossing large lakes in high wind can require a lot of effort. But it's very dry in waves and chop, with enormous primary and good secondary stability.

In the all-Kevlar layup, it is wonderfully light and easy to carry on one shoulder, but it's not made for rock bashing.

The Solitude was never a popular boat (Wenonah sold a lot more Prisms) and hasn't been made in many years, so if it suits your style of paddling and you find one in good condition, don't hesitate!

Submitted by: paddler236209 on 5/7/2015
My canoe is a 2004 tufweave model and I absolutely love it. I bought it second hand 3 years ago but it was like brand new when I got it and still looks almost perfect today having been stored indoors it's entire life. It's about 10 lbs heavier then a kevlar canoe of the same size but the tufweave is awesome. It does not creek and flex like kevlar but is solid and reassuring. The solitude handles exactly how this sort of canoe should. It is a perfect compromise that excels at nothing yet is composed at everything.
5

Finally found a used one for…

Submitted by: paddler234794 on 9/28/2012
Finally found a used one for sale in great condition. Had been looking for a nice one for years since they quit manufacturing this model. If you have one and are willing to sell it, contact me.
5

I bought my Solitude back in…

Submitted by: paddler233352 on 9/8/2009
I bought my Solitude back in 1992 a white gel coat tuf-weave, tractor seat model. I was planning on selling it but after reading these reviews I thought what am I thinking? It's a great canoe that has been a trustworthy friend for all these years of paddling.
4

I have been paddling a…

Submitted by: paddler231873 on 11/2/2006
I have been paddling a Solitude for 5 years now. In that time I have run some white water, paddled mountain lakes,had it out on Lake Michigan, and on salt water in Rhode Island Sound . There are a number of things I like about this boat. I find it to be very stable, reasonably fast, and very pretty. It does however weigh a lot. Mine is a Tuffweave boat with wooden trim and a cane seat. I bought it new one year after it was discontinued so it was cheap($375.00) and a great price by the pound. Over all, the thing I enjoy most about this boat is how well it handles open water. The biggest factors are wind and chop. The pronounced tumble home helps with both; providing a stable dry ride. If you can find one buy one!
5

What a great all around…

Submitted by: Redbone311 on 8/7/2006
What a great all around canoe! I bought this used for a song. Kevlar ultralight layup. Which weighs 30 lbs. Bought it so my girlfriend can paddle with me and can even carry it around herself if she wants. Super stable boat w/ lots of tumblehome so paddling is easy. Pretty good forward speed also for being so manuverable. This was a long time We No Nah model. They should have never dropped it. I love their boats... also have their 18' Jensen, and Solo Prism. As well as two of the Current Design kayaks (manufactured by WeNoNah). For a faster solo (less stable & less manuverable) get the Prism - which is the best Solo out there - period. Tried all the others.
4

This is my SECOND solitude. …

Submitted by: paddler229814 on 7/18/2002
This is my SECOND solitude. The first one was tuff-weave. Since my wife is only about 100 lbs when climbingout of the lake, I bought the ultra light model for her. The boat is about thirty pounds and paddles. I love the boat for its stability and its maneuverability. It is great for fishing and photography, or just playing on a lake or river.

Would I buy the boat again? I did.

I bought my Solitude used.…

Submitted by: guest-paddler on 1/25/2002
I bought my Solitude used. This 15 and a half foot Tuff-Weave canoe has excellent stability whether loaded, or paddling empty across whitecaps in the middle of a lake. It's great tumblehome makes paddling easy. I find the tractor seat very comfortable for long days on the water. I can only handle cane seats for about an hour before I want to get out to stretch. The Solitude is stable enough to lean back and put your feet up on the gunwales to stretch while afloat. With Wenonah's carry yoke, I'm able to portage this 50 pounder for over a mile without wanting to rest my shoulders. A great tripping boat!
5

Submitted by: paddler228051 on 4/11/1999
Rating a "high 10", this Jensen designed Tuff-Weave canoe has a sliding seat to keep trim perfect; enough tumblehome for loaded stability, without getting in the way of paddling. Better than expected glide for a short boat. 1 and only "not-perfect" is lack of back support availability for tractor-style bucket seat; great for paddling, but tough on lumbar when stopping to fish for a while, do some photography, et cetera. (We-No-Nah claims (via "Debbie" on 'phone) that they're looking for a suitable bucket seat add-on... any enterprizing inventors out there???) All in all, the Solitude's the BEST I've ever come across, in my 51 years!
Solitude
by Wenonah Canoe, Inc.
Submit Your Review 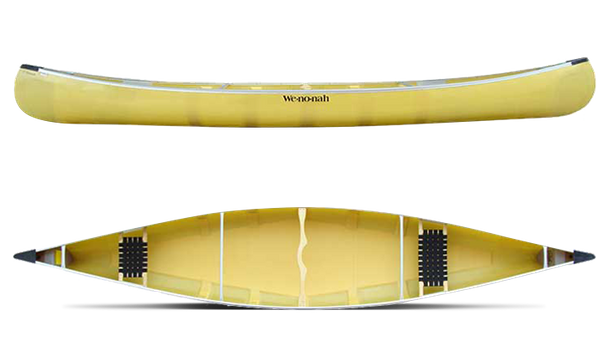 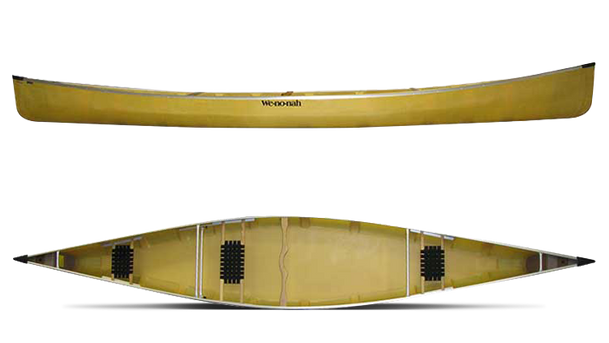