Read and submit reviews for the Freewater.

Read reviews for the Freewater by North Shore Sea Kayaks as submitted by your fellow paddlers. All of the reviews are created and written by paddlers like you, so be sure to submit your own review and be part of the community!

Northshore is now owned by…

Submitted by: paddler235299 on 8/21/2013
Northshore is now owned by Valley Kayaks but not back when they were building the Freewater. The interesting thing is the Freewater has Valley hatches and looks like a Valley product on close inspection. I own several Valley boats. As was mentioned by the other review, the Freewater was the predecessor of the Shoreline AKA Atlantic LV. I also heard they made these boats in Denmark under license after North Shore discontinued the model.

The Freewater is a classic Greenlander and had enough storage space in the stern while I was exploring the coast for several days. There is not a bow hatch but instead a flotation bladder. I have replaced and put a heavy duty one in. I sat inside with the cockpit full of water once and she just floated. These boats are hard to find now and I have only seen one other in my time kayaking. They are amazingly seaworthy kayaks and easy to do backward leans and role. I have pushed the limits of wind and ocean with this kayak and have built a sturdy trust in it.

I own a Valley Skerray FG and a Pintail. This kayak is closer in looks to these boats and behaves somewhere in between like a bigger boat even though it is a foot shorter. The initial and secondary stability is excellent. It does not have a skeg or rudder like the other two boats and I am not in a rush to put one in. It measures 16' in length, just under 22" in width, and a little over 12" in depth. I believe it is glass and diolene and it is very light, under 38 lbs. The kayak edges and maneuvers well in the rock gardens. It has a good speed for its size and keeps up with the longer boats with medium speeds.

All in all this has been a real fun boat for day tripping or weekend tours. It is one of the best looking boats of the 20 boats I have owned. I think it deserves a 10 because of the fun and enjoyment it brings.

Without the front hatch and just the air bladder, I have room for a dry bag as well as a storage net that hangs under deck that I have rigged up. The back hatch is a Valley with lots of room & it is water tight. This kayak has enough hatch room for several days of touring. The deck line and bungees are laid out simple into recessed fittings. I have worked as a shipwright and the inside resin & glass finishing is excellent.

I agree with the reviewer below on just about everything else he has covered. "I gave it a 10 as compared to other boats from that era, in design, maneuverability and practicality. It is very light for a non-Kevlar boat, very seaworthy for it's size and of course has beautiful lines. If you can find one of these little beauties at a good price grab it. You won't regret it.

The reason I am doing this…

Submitted by: paddler234835 on 11/20/2012
The reason I am doing this review is because I have seen only one other review on this kayak and it is such a unique kayak. There is very little information on this kayak on the internet as well. This is some of the research I found on the Freewater.

The early designs when Valley took over North Shore were sold to Kajak Centrum, an old reputable Danish company specializing in kayaks, canoes & accessories. They had a few of these boats built under the Eagle Freewater label. As I understand they were identical and very good quality as well. Northshore (now part of Valley Kayaks) still builds a close cousin that was formerly known as the Shoreline and now known as the Atlantic LV. There was a Shoreline under the Eagle label as well. Both of these designs have had a big influence on coastal exploring day trippers.

The Freewater is a rare but incredible little Greenlander. I have had this little kayak out in some nasty 30-knot tidal chop off Vancouver Island in November. I think I might have been more comfortable in my Nimbus Telkwa but in all honesty, it is probably more my nervousness of it being the smallest of my four kayaks.

The initial stability is good & the secondary is a confidence builder. It does not have a skeg or rudder & I haven't seen any need to add one. At 16' in length, 22" in width, and 12.5" in depth this composite glass kayak is very light. It is nice not having to use a dolly as I do with my other kayaks. This is as an easy kayak to maneuver and lays over nice to edge. I am happy with the speed.

It doesn't have a front hatch so I have an air bladder, room for a dry bag and there is still room for an under deck day hatch which I have rigged. The back hatch is a Valley with lots of room & it is water tight. This kayak has enough hatch room for several days of touring. The deck line and bungees are laid out simple into recessed fittings. I have worked as a shipwright and the inside resin & glass finishing is excellent.

I agree with the reviewer below on just about everything else he has covered. I gave it a 9 because of the beautiful lines it has. If you can find one of these little beauties at a good price grab it. You won't regret it.

The Freewater is a wonderful…

Submitted by: guest-paddler on 8/20/2001
The Freewater is a wonderful Greenland style day tripper. The hull is a well built and made of fiberglass. The kayak has maintained it's integrity well after several years of use, sometmes hard use. The design gets many compliments. Deck fittings are recessed and built into the structure of the hull.

The Freewater has a large cockpit, making it possible to lift ones knees up. It is comfortable for someone up to 6 feet and around 170 pounds. Especially nice for smaller people.

The kayak is a joy to paddle. It would be nice for a beginner or as a day tripper for a more advanced paddler wanting to enjoy paddling in the waves. It has good stability and is easy to lean on its side. It has no rudder but handles well without it. It tracks well and turns easily. It is not as fast a longer kayak but moves along at a good pace for a smaller day tripping sea kayak.

It surfs nice for a sea kayak, but not as good as a more specialized kayak designed for surfing. It is easier to roll than most WW kayaks. I have self rescued after flipping in the ocean surf by lifting the bow up and empting out the water of the cockpit, while floating, and then climbing in.

The Freewater can be used for longer trips but it's storage system is more difficult than most. An air bag is required in the front as there is no hatches. You can use a storage air bag in the bow, but that would make access to your stuff more difficult. The rear storage compartment is behind the seat and is not easily accessible. The cover for the rear compartment is not air tight but it will work as floation with minimal leakage. 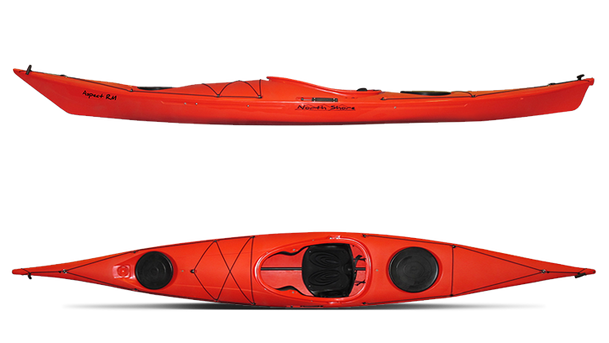 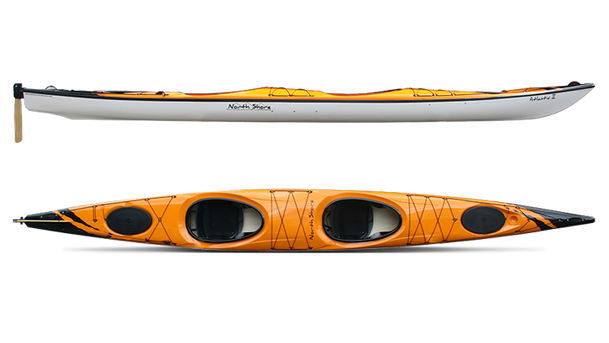 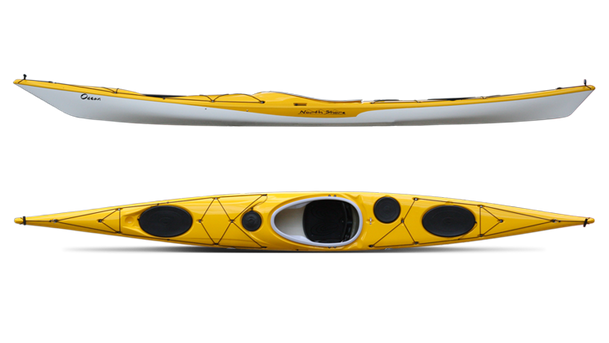 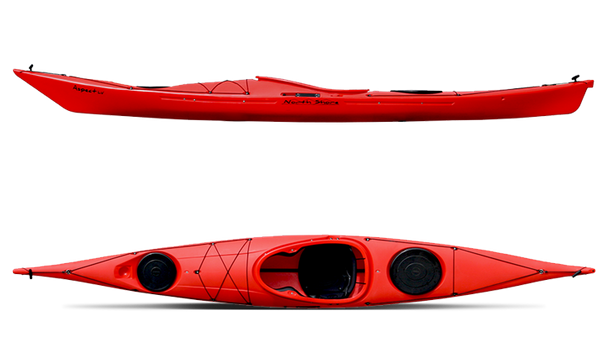