by  Lincoln Canoe and Kayak

Read and submit reviews for the Eggemoggin.

Read reviews for the Eggemoggin by Lincoln Canoe and Kayak as submitted by your fellow paddlers. All of the reviews are created and written by paddlers like you, so be sure to submit your own review and be part of the community!

I purchased a used Lincoln…

Submitted by: MedicineMan on 8/12/2004
I purchased a used Lincoln Eggemoggin via Jersey Paddler and drove to Brick, New Jersey last week to retrieve the kayak. While on the eastern seaboard we took the opportunity to paddle a few sights which allowed me to become aquainted with the Egg as we soon began calling it. I found the Eggemoggin after a year long boat with a 'glove-box' or emergency hatch immediately in front of the cockpit. We discovered kayaks with this feature on a trip to New Zealand last September and found that the ubiquitous 'day-hatch' pales in comparison to the utility of the glove-box as it is called in NZ and Australia.

If you have tried to access the day-hatch in a quatering sea then you know the futility of that move. The Eggemoggin sits comfortably, and this compared to a Nordkapp Jubilee I've been in for over 3 years. The Egg's backband is more comfortable and the seat proper is of a conforming compound that is more akin to a very firm pillow. The cockpit length was 1.5inches shorter than the Nordkapp and required me to sit on the deck and slide in versus a one leg in knee up entry I use in the Brittish boat. Ininitial stability and secondary stability of the Egg are beyond the Nordkapp's, attributable to the 1inch gain in width and the more sheer chine.

Tracking is better as well as it should be with a more pronounced 'v'. Paddling speed need not be a detractor in this Lincoln model. I sprinted to 5.2mph according to the Garmin on the deck. A normal crusing speed of 4mph is easy to maintain for several hours depending on conditions of course. The bow and stern of the Egg are not as pronounced (well not at all) compared to the Nordkapp and this fact was appreciated in windy crossings.

I experience such little weather cocking I would say that it is insignificant in this boat. Another feature I liked about the Egg was the use of the Kajak-Sport hatches. 1 large oval in the stern (16.5x12 inch), a typical day-hatch (6inch round)cover on the day-hatch, the small cover of the emergency gear hatch (4inch round), and a medium size (9.5inch round)in the bow. This 9.5inch hatch in the bow is an improvement over the smaller bow hatch of the Jubilee (and noted that Valley has introduced the Nordkapp H2O with 2 large hatches)...

The Egg is advertised as weighing 42 pounds and I can only guess it is accurate,e.g. I have not scaled it as of yet, but it feels that light (though slighly heavier than a kevlar Sea Lion we have). Durability---well this is a used boat and one can only guess what it has gone through. The slight number of scratches either paint a picture of a very careful former owner or a life devoid of rocks and oyster shells. Obviously it is not intended to test the reverse impact of a rock garden like the Brittish boat but on the other side of life is the fact that car-topping is part of kayak touring and the Egg dominates here.

Overall impression of this boat is OUTSTANDING if not for the emergency hatch alone, it is as monumental to me as a paddler as sliced bread was to a sandwich maker at one time...for ultralightweight backpackers it is a revolutionary as the Ultralight A-sym byHennessey Hammocks. When paddling last week in New Jersey, Delaware, and Assateague I kept a marine radio, a digital camera, and 3 snack bars in it. Other smaller items would have fit as well. All modern sea kayaks should have this feature and I will not consider buying another kayaks unless it is there-nuff said about the glove-box. Other features: retractable skeg, smooth in operation and driven by bar (rod)and not wire (cable)-another plus over the Nordkapp (in my book anyway).

Negatives: behind the cockpit is a nice glassed in bulkhead but in front of the feet is a foam bulkhead as well as between the day-hatch and the bow hatch....why didnt Lincoln glass all the bulkheads? I agree that foam gaurantees flotation even when the boat is without dry bags but I think glassed in bulkheads give so much added strength. Another negative- the nameplate looks kinda cheesy to me, but then again I was never found of the 'Jubilee' nameplate either...not the names themselves mind you, just the decal applique' and the font chosen. One last negative.....the keel strip is not so neat on the stern end...this could be a minor mishap with a rock by the former owner-cant tell.

OK, if your lookin at Lincoln for a kayak strongly consider this boat, I would not hesitate to purchase another Eggemoggin if perhaps something terrible befalls mine.

First, let me explain my…

Submitted by: guest-paddler on 4/5/2004
First, let me explain my background and biases. My first boat was a Nordkapp HM which I bought in 1990. I expended a lot of adrenaline my first couple of years learning to paddle in that skinny boat, but I loved the speed. I switched to a Nordkapp Jubilee about seven years ago and loved it as well. I came to believe that the longer the waterline and the narrower the beam, the better the boat.

A few years ago I talked Sandy Martin into trying my idea for a forward day hatch. When he came out with the Eggemoggin he gave me a good deal on one in exchange for the day hatch idea. I had some mixed feelings because it was a couple of inches wider than my Nordkapp and I was loath to give up the speed. The first time I took it out I had three to four foot waves, not very steep, but enough to get up on for a ride. I was shocked when the bow submerged, but was amazed how it cruised along just under the surface without trying to dive or broach. When I leaned back it surfaced, no problem. It seemed to me that there was not enough volumn right up in the bow. Also, I gave up a little speed with the wider Eggemoggin, but on the other hand it was nice to be able to use a camera or binoculars and not having to be always ready to brace. The Eggemoggin turns easier than the Nordkapp, but still tracks well and does not weathercock, it rolls easily, and it has a tremendous amount of storage space. And, of course, I love my forward day hatch.

Over the last two years I have had the Eggemoggin out in eight foot breaking waves, winds up in the 30 - 35 knot range and last summer paddled it on trip from Portsmouth New Hampshire down the Maine coast to Canada. I have really grown to appreciate the Eggemoggin. I think what happens surfing is that the low volumn bow submerges fairly easily, but the wider fishform hull just behind the bow has enough bouyancy to keep the bow from diving further. I'm not a surfing fanatic, but I have been some fairly big and steep waves and I feel comfortable with my boat. The bow still goes under, but it has never broached or pitchpoled.

On last summer's trip on the Maine coast, my two companions were paddling longer narrower boats but I had no problem keeping up. The speed sacrifice was not as much as I thought. When they were fussing about holding a course, my Eggemoggin cruised along oblivious to the cross wind and waves. I have fiddled with the skeg occasionally when surfing, but if I were buying the boat again, I would get it without the skeg, I don't think it is needed. On the whole I am very happy with the Eggemoggin. Sandy has come up with a very nice cruising boat.

Eggemoggin
by Lincoln Canoe and Kayak
Submit Your Review 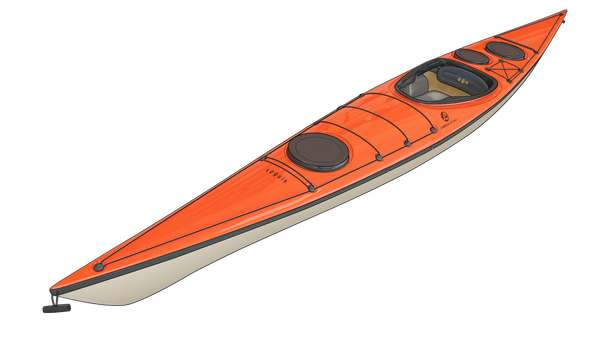 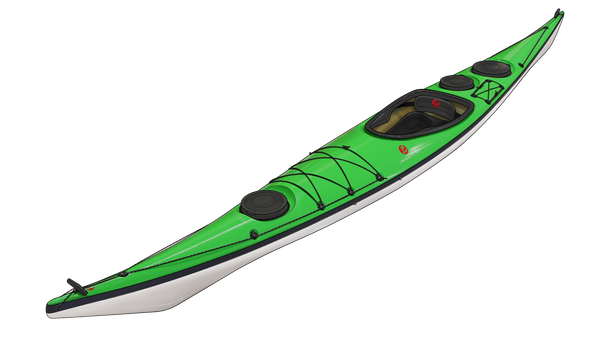