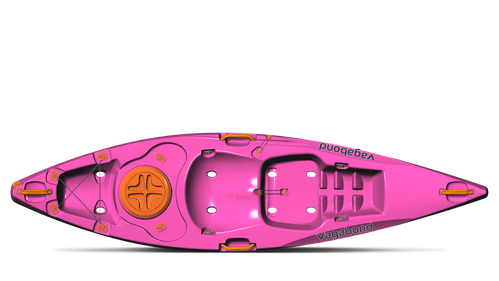 The Kwando is made for children, but it is definitely not just a floating toy. With this kayak, children can cut their teeth on flatwater and easy rivers by learning basic paddle strokes and skills. It has the performance and the features of our adult boats – just packaged in a size that a child can physically manage.

Read and submit reviews for the Kwando.

Read reviews for the Kwando by Vagabond Kayaks as submitted by your fellow paddlers. All of the reviews are created and written by paddlers like you, so be sure to submit your own review and be part of the community!

We live on the Kitsap…

We live on the Kitsap Peninsula and are surrounded by beautiful, but cold saltwater. A few years ago, we stopped at Lake Crescent Lodge and rented a couple Necky Tandems. I was impressed with how well they handled the chop on the lake and so a couple weeks later we had a pair of Manitou 2 kayaks which served us well for the next 3 years. Last year, we took them out at Freshwater Bay on the Strait of Juan de Fuca and had to turn around when we got around Pillar Point. With each of us having a kid on board, I decided that the wind and waves were too risky should we take on water and lose any buoyancy. If we wound up in the water, there simply was no way a cold shocked kid (even with a wetsuit) was going to be able to help with a recovery. I had already been contemplating getting myself a sit-on-top, but now realized that with kids, I really wanted that for the whole family. I really appreciate the ability to just flip a boat over and have it drain itself through the scupper holes while you just climb back on top. Below I will post a link that shows the Kwando doing exactly that.

I started searching for a nice SOT for the kids and never really liked any of the ones I saw. I considered the Viking Lagoon, but at $500, could not justify it -- especially since it lacked some storage features and frankly, looks kinda clunky.

In the mean time, in January, I picked up one of the last Swell Scupper 14's and have really enjoyed paddling it. Since then, Jim (Swell Watercraft) has partnered with Vagabond Kayaks to produce the S14 and has now become the sole U.S. distributor for Vagabond Kayaks. In searching Vagabond's site, I discovered what I had been looking for -- The Kwando. Rather than looking like a typical clunky kid's kayak, it looks like a sleek miniature version of a top-notch adult SOT. And after watching my kids paddle it, I would say it is exactly that. It is fast and very stable. And in the unlikely even that one of our kids accidentally winds up swimming, they can flip it back over and easily climb back to safety. In the cold waters of the Salish Sea, that is a huge deal. While it does retail for $400, bear in mind, you are getting a $400 kayak. The Kwando has excellent storage. It's sturdy and tough. It paddles fast (loved watching my son absolutely smoke the competition as he raced a kid in a Lifetime kids kayak). But most of all, it is a safe boat -- as long as you secure the gear hatch and screw the drain plug in.

I also should mention that I have received excellent service from Jim. He is a swell guy and I am not just saying that because he owns Swell Watercraft. He is very knowledgeable and enthusiastic. He also stands by the products that he sells.

In addition to the two Kwandos we bought for the kids, we got a Tarka for my wife, which she absolutely loves. Eventually will pick up a couple more as the kids outgrow their Kwandos, which we'll keep for when we take friends and relatives out with us.

Links to a couple videos: