Read and submit reviews for the EZ-Vee.

Read reviews for the EZ-Vee by KayakPro USA LLC as submitted by your fellow paddlers. All of the reviews are created and written by paddlers like you, so be sure to submit your own review and be part of the community!

I have been using EZ-Vee kayak carriers for many years to carry surf skis, and they work really well. They allow me to carry two surf skis at a time on a short roofline car. The bungee attachment system is really convenient and easy on the boats; I use three of the bungees in the front and two in the back, and I've never had an issue with retention even when driving on the highway. I do use straps with larger volume surf skis, because the bungees are a bit short for higher volume decks, but using straps is really convenient as well. Being able to carry a 24.5 foot double surf ski on a short roofline car is the best (I do put a line on the front of that boat). The finish has proved to be very durable over the years I've had the carriers on the car, in all weather. Kayakpro is great to deal with if you need new pads, different attachment adapters, etc. They are not cheap, but they carry expensive carbon boats safely so they are worth it and deserve 5 stars as far as I'm concerned.

I posted this on a thread,…

Submitted by: carldelo on 4/8/2008
I posted this on a thread, and realized it is basically a review, so this is an update to my earlier review below (07-11-2006).
I've been using an EZ-Vee Plus for two years now with no problems. I bought it because one of my boats has no attachment points for front and rear tie-downs. From May - September, it sees continuous use, at least 3 times per week.

The Mini factory bars remove completely in a couple minutes. I leave the EZ-Vee attached to the factory bars permanently, so the whole thing lifts off in one piece, which is very nice. I had to make custom attachments to mount it on the factory bars, which was not too hard.

If you had to remove the EZ-Vee from the bars, it would take a while as others have noted - there are 8 big Allen screws holding the EZ-Vee to the bars.

The bungee issue is a non-issue - people talk as if you are required to use the bungees, which is silly. You don't have to use them if they make you nervous, and in my case they are a backup system to normal straps. This should not keep anyone from using the system.

Hull damage - hasn't happened yet. I have added pool noodles over the straight mounting bars and strapped them in place with zip ties, and replace them when they get worn. This seems to solve the issue of stress concentration.

In addition, the EZ-Vee itself acts as a suspension, reducing stress on the hull. The boat is attached to the ends of the carrier which are 8' apart. The carrier is connected to the factory bars which are about 3' apart. When the car bounces around, the whole rack system can flex up and down an inch or two, absorbing a lot of the vibration. For saddles that are connected directly to crossbars, that vibration is carried directly to the boat. Also, the Vee parts are movable, so you can set them at the bulkheads if you like (I don't bother).

I like the system (obviously) and will be adding a second one to the Mini this spring. It's pricey, but the fact that Thule has copied it (not very well, by the looks of it) should tell you that the idea is good.

OK, sales pitch over - and no, I don't work for Gray, but he is a nice guy to deal with.
Cheers, Carl

Submitted by: guest-paddler on 7/17/2006
I have the "Plus" version. It does load quickly though that efficiency is lost through the extra time it takes to install the carrier (see below). Would probably be best for surf sea or K1/K2 type of kayaks. OK for sea kayak as long as it's not too heavy.

Likes: Once the EZ-Vee is installed, the kayak can be loaded and secured quickly with the bungies; No bowlines; Seems to be well-made.

Dislikes: Not only expensive, the actual cost was higher than what was advertised on the Kayakpro website; The minicell foam on the "vees" is not strongly adhered; The rack does not install quickly (eight allen head screws)and cannot really be left on the vehicle when not in use.

Rating is for product only. OK overall, but with some definite trade-offs compared to other alternatives. Moreover, I would have to disagree with the Kayakpro's website calling this the "ultimate kayak transportation."

Kayakpro.com still shows the incorrect price despite my complaint when I purchased mine awhile back (I still had to pay the higher price). Rating: 6 of 10

I bought the EZ-Vee Plus so I…

Submitted by: carldelo on 7/11/2006
I bought the EZ-Vee Plus so I could carry my gorgeous 17' wooden kayak on my 12' Mini Cooper. I specifically did not want to drill holes in the mahogany hull to add front and rear lash points. The EZ-Vee allows me to set my boat on the carrier, lash it with two heavy bungees and that's it - about a 10 second tie down, with no bow or stern straps needed. I've driven 7 hours to VA and 10 hours to Maine from NYC with no issues whatsoever. I'm a mechanical engineer, and will say that the heavy duty aluminum extrusions, welded joints and large fasteners are very well done. The carrier is made to fit either Thule or Yakima, but I adapted it (fairly simply) to fit on my factory Mini rack (I can email photos to the curious or disbelieving). It was a little expensive, but I have no regrets due to its strength and the rapid loading - at the end of a long cold paddle in the rain, it's nice to have the boat loaded in under a minute. I generally use a Lasso Lock in combination with the bungees for theft protection and as a fail-safe, but it hasn't been needed. In fact, I get as many questions about the EZ-Vee as I do about my Struer flat water boat. Comes in different lengths based on hull type - highly recommended.
EZ-Vee
by KayakPro USA LLC
Submit Your Review 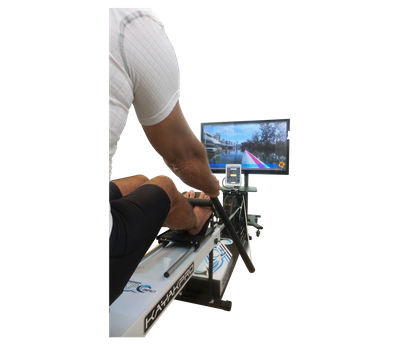 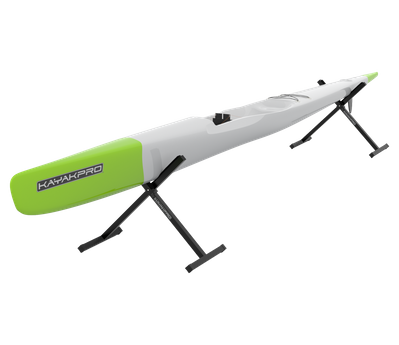 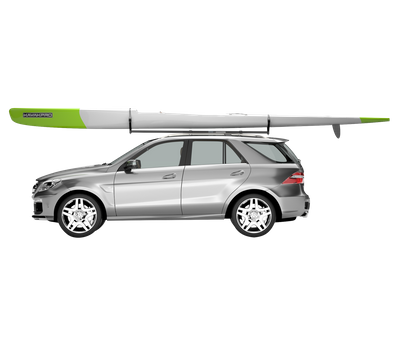