Read and submit reviews for the Solar II.

Read reviews for the Solar II by INNOVA Kayak as submitted by your fellow paddlers. All of the reviews are created and written by paddlers like you, so be sure to submit your own review and be part of the community!

Well this is a review of the…

Submitted by: guest-paddler on 8/12/2011
Well this is a review of the original Solar 2, blue and blooming marvelous it is too. It is a strong and very robust boat indeed. It is incredibly easy to blow up and deflate. It is also very easy to clean afterwards and can be dried after cleaning in an instant. Being long it tracks well but I am sure it is worth using the skeg in nearly all circumstances. The only down is that the kayak is tricky to get into the very tight bag that comes with it.

I have two Advanced Elements Airframes. They track better, but in a British climate are very difficult to clean and dry out properly. So I would recommend this boat to anyone. The new models have seats like the Sunny2 and that is probably an improvement. They are good value and very robust. I would strongly recommend it to anyone.

My only kayak is the Solar II…

Submitted by: guest-paddler on 3/21/2011
My only kayak is the Solar II (original model) I got in 2005 through The Boat People. Add my outstanding impression of that company to the others. Lee took his time and was incredibly helpful. I got it with the foot pump. It blew out, and I didn't like it much even when it worked. Lee applied the cost of it toward a marine-style PVC pump. That thing is awesome. Extremely durable, and faster than you'd think. I use a cheap low-pressure electric pump at the car to get each chamber basically filled, then top each off with the hand pump, which I keep in the yak.

As for the Solar II itself, I love it. I've taken it down class 3 rapids, beach camping and spearfishing in the Sea of Cortez, and fishing along the TX coast. It handles great solo, but I almost always have someone with me. With two sub-200 pound guys in it, I've been able to compactly pack all the camping and fishing/snorkeling gear for overnighters.

I'd call myself a low-intermediate skill paddler, but this yak handles well. Nice straight line with the fin on. Very stable and easy to get in and out of while snorkeling. Doesn't feel lightning fast, but quicker than sit-on-top hardshells I've rented.

Impressively tough construction. I use a couple of basic crazy creek chairs instead of the stock cushions, and never inflate the foot pads - way more room this way for 2 passengers. Cut a cheap plastic cutting board in half and slid the pieces into the seatbacks to hold the sidewalls apart. Hold the chairs in place with quick-release webbing belts. The chairs of course double as beach chairs and under-tent-floor (soggy!) sleeping pads when camping.

I got the 4-piece carbon (no corrosion issues) paddles from the boat people, so the whole thing is airplane-checked-baggage-worthy. If you want one kayak to take anywhere and do about anything, this is it!

We have had this kayak now…

Submitted by: guest-paddler on 9/12/2007
We have had this kayak now for a year and really like it a lot.
We bought it to take with us on trips up to Michigan to use out on Lake Michigan and also to use on small, inland lakes here in Illinois.

The plus is obvious...this is a wonderful, basic boat that is stable and yet reasonably fast. It will catch some wind, but actually less than our recreational hard shells often do. It packs into a large backpack bag and is easy to store. We tend to pack a lot on our trips, but this kayak fits in the trunk or back seat very well.

One of the reasons I didn't give it a 10 was some flaws in workmanship when we got our boat. We had to send the first one back because of a flaw to the outer rubber coating. We could have patched it with Aquaseal, but chose to send it back since it was a brand new boat. On our first outing on Lake Michigan, on a day where the water wasn't very rough, the skeg patch tore back. We glued it back on but this was kind of irritating since the boat hadn't been through anything unusual and had only been used a couple of times at that point.

Since then, we only use the skeg when we really need it, such as when we want to go on a longer paddle or if the wind is up. The boat does have tracking strakes on the bottom so unless you are doing lake paddling or touring, you may not need it... for this I mean situation such as casual paddling on slow rivers or surfing. On slow rivers we tend to shoot ahead of the recreational kayaks we paddle with. It's really not that slow of a boat. Wouldn't be at all comparable to a sea kayak, though.

We have used it to surf 1-3 ft. waves on Lake Michigan and it is a blast. We always paddle tandem and it's worked very well, as long as you have a partner who can synchronize a bit. (Not always the case since I go out with random family members). The boat tends to take on water during the launch, so we take along a bilge pump and sponges. Once in the calmer water outside of the surf zone, we'll pump things out and paddle around a bit. Then we head back in through the surf. As the previous reviewer noted, this is "Woohoo!" time. This boat is speedy in the surf, stable and not difficult to control. Really, really fun, even for people who aren't experienced paddlers.

We also have gone out when the water is more overall choppy on Lake Michigan with less pleasant results. Because of the boat's low profile, it tends to take on water, which needs to be pumped or sponged out. It will take on quite a bit of water without sinking, however. This is definitely not a boat to take on big water in rough conditions however. It would continue to take on water and will tend to weathercock in strong winds.

In the situation of surfing, where you have a short ride and then can dump out any water it works pretty well. In surf however, it does tend to ride well over the waves and we only take on water when the waves catch up to us when we hit shore. As others have mentioned, it is pretty amazing and fun how this boat "boufs" over big waves. It's almost like a roller coaster ride and that part is a lot of fun.

In general, this little boat has a lot to offer, especially in light of its convenience. The user just needs to keep in mind the conditions where it will be used and not take it out in anything that is beyond what it was designed to do.

Submitted by: guest-paddler on 9/25/2006
This is just a follow - up to my earlier review. I still absolutely LOVE the boat, but I discovered that if you're fairly robust individual ( I'm six two and two twenty ) and intend to surf bigger waves, this boat will absolutely not work for you once the waves reach a certain height.

When surfing small waves or gentle swells this boat works fine, but on larger, steep, 4 feet waves and above the boat "tacos" on you. It is simply too long with one heavy person in the middle to retain the necessary air pressure to prevent this from happening.

This isn't a design flaw, this is NOT a surfing boat. Just wanted to add this as a FYI. Of course, if you're surfing this thing tandem, whoooo - you'll fly, and you won't taco, because you'll have weight in the rear to counteract the waves' lifting force.

I couldn't be happier with the boat overall.

This boat is exclusively sold…

Submitted by: guest-paddler on 8/14/2006
This boat is exclusively sold through The Boat People, an outfit in California with a website that is not just informative but also quite hilarious. One of the very few places that aren't afraid to tell you exactly what they think, which is probably why I took an instant liking to Lee, the owner.

I also own a Safari from Innova, so my comments below are very much comparative in nature.

First, this Solar II is a tandem, with seatbacks like the Safari's but lacking a seat cushion. One sits directly on the inflatable deck. The boat has two seats and two footrests; if you want to paddle solo just switch the tracking fin from one end of the boat to the other ( two mounting locations are provided ) and sit facing "the wrong way". You're almost perfectly centered and the boat handles beautifully as a solo. Not to mention that as a solo craft this kayak has an enormous amount of storage space.

This boat is FAST. I had expected it to be faster than the Safari and it did not disappoint. It also tracks much better. Much less to-ing and fro-ing of the bow with every stroke, and I'm willing to wager that a powerful paddler with skill can easily keep up with most rec touring hardshell boats.

Sitting on the floor does get your rear end a little wet, but on a warm summer day that's not a bad thing. In winter I'd advise some sort of an insulating cushion about an inch high. Overall I'm very, very happy with the negligible amount of water entering the boat; since it's not a self-bailer like the Safari that had been one of my concerns. Somehow the hull construction of the Solar II diverts most of the chop away to the sides as opposed to the "in your face" bow effect of the Safari.

The boat is also much stabler than the Safari, because you're sitting at or slightly below the waterline. This contributes to the great tracking and respectable speed, since the lower a boat is the less surface area it presents to the wind.

The ONLY area in which the Safari wins easily is playboating...as it should, because that's what it was designed for. In all other areas that matter - speed, stability, tracking, and volume - the Solar II is a convincing winner.

Did I mention? Instead of the dreary green of the Helios or the off-putting red of all the other Innova boats, this ons is...blue!! And gorgeous! 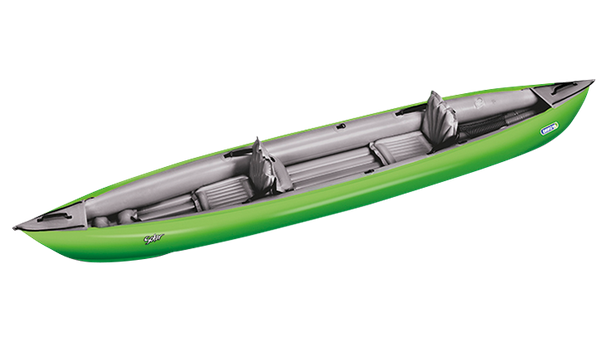 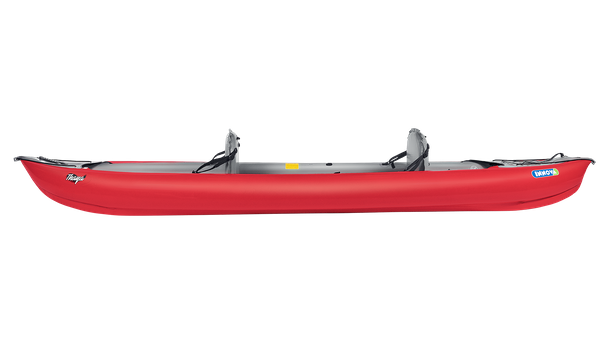