A two model sized series of solo touring canoes designed for lake country travel. Agility and tracking are blended in these canoes, which are capable of covering long distances with heavy personal loads in many types of water conditions. They paddle easily, covering the same daily mileage as tandem canoes. Innovative above water-line shapes give these canoes increased final stability without sacrificing seaworthiness or comfort. Note the load capacity variations of the two canoes. The Kestrel is the smaller hull and has less wetted surface than the Peregrine allowing it to maintain equal hull speed with a lighter, less strong paddler. The assumption is that the total load will also be less. These are safe, seaworthy, comfortable canoes that will reward appreciative paddlers with outstanding performance.

Read and submit reviews for the Kestrel (Falcon Series).

Read reviews for the Kestrel (Falcon Series) by Hemlock Canoe Works as submitted by your fellow paddlers. All of the reviews are created and written by paddlers like you, so be sure to submit your own review and be part of the community!

The Kestrel is a great canoe…

The Kestrel is a great canoe for the smaller paddler. It is one of the two best performing solo canoes I have ever paddled. At 5'6" and 130 lbs, I find most canoes too big and too difficult to paddle or carry. I got my Kestrel 2 1/2 months ago and have paddled it about 3 times a week since. (I live on a 44 acre reservoir.) I've also paddled it on nearby Boyd Lake, a very large reservoir. I canoe only on lakes (I need to return to where I started) and I don't do whitewater. I like to go fast with a minimum of effort. And I canoe only a couple hours or so at a time. I do not do canoe trips, but I think the Kestrel would be a good tripper. The Kestrel has great glide, turns easily, and is fun to paddle. Initial stability is low because of the narrow width, but secondary stability is excellent. It's also a dream to portage.

The Kestrel replaced my 25 year old Mad River Independence, a canoe I loved. But my fiberglass version (45 lbs) just became too heavy as I have aged. The Kestrel (mine is the Premium + model - kevlar/carbon) performs similarly to the Independence, but is quicker initially, easier to paddle, and a bit less susceptible to wind. The other solos I've paddled (on a test basis in years past) are the Mad River Slipper and Malecite, Dagger Sojourn, Wenonah Advantage and Prism, and Bell Magic and Wildfire. Of those, the only one that came close in performance to my Independence was the Magic. I liked it almost as well. The Malecite was too big and too hard to handle. The Slipper was sluggish. The Wildfire didn't want to go straight. The Advantage was the fastest of all, but the wide width and narrow gunwales made it impossible to paddle at anything less than an uncomfortable 45 degree angle. The worst canoe for me was the Prism; it did not want to move! I'm sure it's a good canoe for a large strong person.

While there are so many canoes to choose from, I doubt there is a better canoe for my purpose and size. I love my Kestrel!

The Kestrel I own is in a…

Submitted by: beachcamper on 7/14/2015
The Kestrel I own is in a premium layup, spruce rails 27# Kestrel. I have paddled it almost every weekend for 7 years now and still looks good. Dave makes a very well constructed boat and I don't baby this boat at all.

I was looking for an easy paddling, fairly seaworthy, lightweight canoe for Everglades paddling and camping trips. It is a kneeling boat as set up and I also added an aluminum foot bar for sit and switch paddling. We travel up to 16-20 miles per day when we take off for our camping trips. Because we have to take water with us, the weight is considerable and this canoe can handle me at 170 lbs and enough food/water/gear for a 10 day trip and still be efficient. What I like most is that it is not trim sensitive and with a custom spray deck from Cookes Custom Sewing, I can even do coastal trips with this canoe.

During the year here in South Florida I can fish from this canoe but it is not really designed for fishing it is quite tippy should a big one hit. Best to kneel for stability or lower the seat.

For me it is a good compromise and I make it work for fishing trips. My number one need is for an efficient, relatively fast canoe that is wind resistant and fun to paddle. Did I mention it only weighs 27lbs???

I have owned this boat for 4…

Submitted by: guest-paddler on 7/3/2014
I have owned this boat for 4 seasons now and love it! My boat has a lowered seat and I use a 240cm double bladed paddle.

The Kestrel tracks very well and is super stable, even with boat traffic and their wakes. It is very easy to get in and out of, the placement of the thwarts is perfect. I paddle with a lot of folks with ADK, Nessmuk style sit on the bottom canoes...the ease of getting in and out of the Kestrel is far superior. With only 30#, it is also easy to portage and to car top. The Kestrel is a beautiful looking boat and Dave Curtis is wonderful to work with!

Submitted by: paddler233236 on 7/16/2009
After paddling two sophisticated solo boats (including a Jensen) for more than 30 years I decided that, due to my advancing age, I needed something lighter. After selecting Dave Curtis' Kestrel I feel like I've died and gone to heaven. It is a spectacular boat!
Kestrel (Falcon Series)
5

I have used my premium layup,…

Submitted by: rblturtle on 6/19/2009
I have used my premium layup, spruce rails 27# Kestrel long enough to write a review now. I was looking for an easy paddling, fairly seaworthy, lightweight canoe that was as insensitive to the wind as possible for lake tripping. It fulfilled all these needs well - so my 10.

It is a kneeling boat as set up and tracks fairly firmly which is an asset on windy lakes. It's glide and ease of paddling are remarkable. I had it on a windy lake and loaded for a 4 day trip it it did fine-well mannered. I planned on traveling light but I found it has more capacity than I expected(My170#+75#). It's low freeboard, which helps make it wind resistant, makes it look longer than it's actual length and graceful looking. It also caused less problem than I expected in waves. The only change I made is to raise the seat 1" for more foot room.
Dave Curtis is good to deal with and honest as they come. This boat met all my expectations.

This is a great solo canoe.…

Submitted by: groovymanatee on 8/7/2007
This is a great solo canoe. It is not a high capacity tripper, but for a smaller paddler and moderate gear this boat will make time. It is mildly rockered so tracking is excellent, yet it turns with a bit of edging. Secondary and primary stability is very good despite its rather narrow waterline width. The boat lends itself to traditional kneeling strokes or with the footbrace sitting is comfortable and hit and switch works well. It is quite wind resistant and is not trim sensitive. Workmanship by Dave Curtis is the best in the industry. The layup is flawless, light and strong. Having owned solos from Bell, Mad River and Swift this is truly the best. Dave will work with you on shipping and the quality product is worth the wait.
Kestrel (Falcon Series)
5

As with many of the reviews…

Submitted by: guest-paddler on 11/3/2004
As with many of the reviews on this site, I am writing about a boat I now own. Therefore, I am not altogether unbiased.

Having solo paddled a Wenonnah Solo Plus for years, it was time to reshuffle the fleet. The kids are gone, we have another tandem boat, why not get a true solo? I knew of Hemlock Boatworks, so I read through the Website carefully to learn about the current model line. As I only weigh 145 lbs, I was interested in his Kestrel, rather than the Peregrine which is built for larger, heavier paddlers.

I live fairly near Dave Curtis' operation so I went over to the park one Thursday night where he brings his boats for trial. I paddled a premium plus layup Kestrel that night, but bought the less expensive Kevlar hybrid which weighs 32.5 lbs. The boat is beautiful, with ash trim, walnut decks (scuppered to ensure the water drains) and a fine gelcoat finish. A layer of E-glass lies beneath the gelcoat, with well fitted Kevlar lining the interior. It is set up for kneeling, with a web seat set high enough for legs to go under.

Paddling was a revelation! I had never even tried heeling over one of my Wenonah boats, but that first night I found I could lean a Kestrel to the rail and spin it. It sat rock solid. While it is well rockered for manuverability, the boat can move! The first time out on my local flatwater creek, I went farther than usual, partly because the boat went faster, mostly because it was such joy to paddle.

Dave does not have a distributor network. If you don't live near the NY Finger Lakes, it will not be easy to try one of his canoes. What he does have is a well designed boat, beautifully built. I am very happy with my choice. 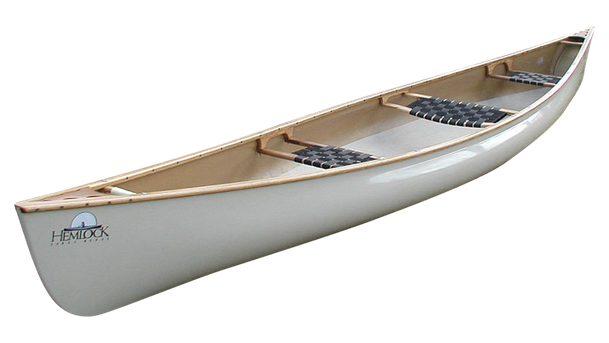 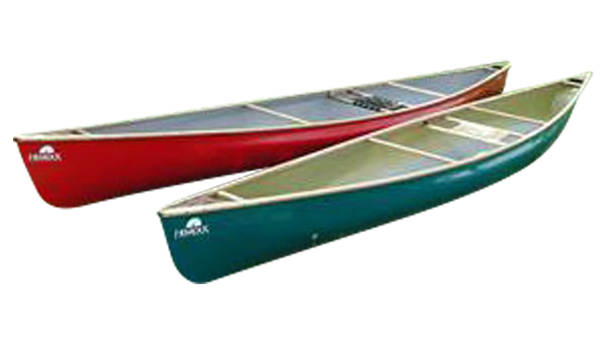