We are currently implementing site-wide upgrades.
Some functionality may be temporarily affected.
your paddlesports destination 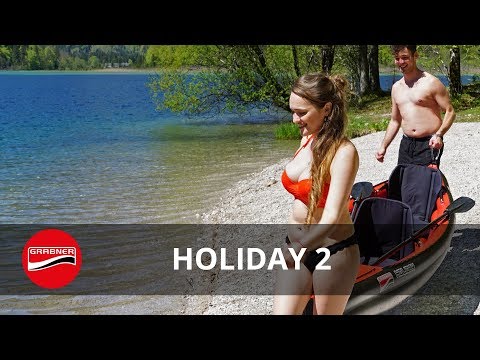 Just like its smaller HOLIDAY 2 counterpart, HOLIDAY 3 is a sleek classic kayak with the same proven qualities in calm waters. This kayak offers enough space for two to three adults or for parents and children who venture out together to discover the (paddling) world. This kayak guarantees pleasure; it is liked by everyone and runs perfectly: The best choice for slow-paced cruising and extended holiday pleasure!

Read and submit reviews for the Holiday 3.

Where to Buy the Holiday 3

Read reviews for the Holiday 3 by Grabner Boats as submitted by your fellow paddlers. All of the reviews are created and written by paddlers like you, so be sure to submit your own review and be part of the community!

Grabner has done an...

Grabner has done an outstanding job bringing a very different and unusual layup with uniquely endearing qualities enhanced by top notch engineering. Whoever would have thought that an inflatable kayak could be one of the lightest, most stable kayaks out there that remains very fast?

From the moment I contacted Grabner they inspired confidence with their knowledge, recommendations and customer service. They were a little insistent on making a sale but in the end their product was so amazing I am glad I purchased their magnificent boat. It's a long story but I spend a lot of time in Europe and wanted to have a kayak for us to use out there. I wanted the luxury of leaving it there since it would be a bit of a hassle to truck it back and forth but at the same time I had some issues with being able to send things that large to a European country, import taxes and all that jazz. Buying from Grabner directly in Austria was a big help.

The boat is unbelievably good. You didn't think an inflatable could paddle, maneuver and handle so incredibly well and I will get into the gory details but it's faster to sum up the negatives so I will start there. One big drawback (and there are two which I will discuss) is even for people with storage issues the Kayak cannot be stored folded for long periods of time. It will ruin the rubber and shorten the lifespan, you just can't roll it up and pack it in the back of a closet. You can de-inflate it but you have to roll it out and keep it flat, all 5+ meters or 17+ feet of it. Since no one uses the areas we stay while we're gone then it's not a big deal but if you live in a tiny apartment European style and think you can just tuck it at the bottom of a closet you can't or it won't last long. Short term storage, like a few days or weeks at a time is OK and will only shorten the lifespan slightly from a theoretical 20-25 years but that's the name of the game. So customers looking for something easy to store need to either go to the top of the price range with the foldable route or get a very cheap, flexible inflatable that paddles awful but then you just cram it wherever and not care (as much) if it gets ruined.

The other negative is the seats. They are not that comfortable and quickly start to ache your back. You have to set them properly like any kayak seat, they are thin and light and a bit flimsy so failure to do so will result in your discomfort being maximized more than any other seat but they're still not great. I recommend getting kayak seat covers that you can put over them, then its fine.

Other than that the Holiday 3 is a joy to paddle. Because the rubber is specially reinforced and of high quality it can withstand about 0.3 bar or ~about 4.4psi above atmospheric. This creates a very stiff boat that won't flex when you paddle. It's a funny feeling when you sit in the boat as it does move a bit more than a plastic or composite craft with waves, but when you actually paddle it nothing moves and you feel your effort moving the boat; it has a lightness about it that is more reminiscent but not quite as good as a composite, but certainly far nicer than a plastic layup.

What is very impressive is the low weight of only 43lbs. Comparable length and size boats that come in kevlar or even pure carbon fiber are far, far more expensive, a bit nicer to paddle, but are nowhere near as light. Even the Stellar ST17 in their Ultra carbon fiber layup is a few pounds more. What this means is a wonderful experience, even my 10 and 12 year old sons can grab one handle, I grab the other and we can carry it significant distances with only a handful of rest stops. The boat also accelerates nicely in the water and changes direction pretty deftly when desired. The light weight does make it a little more responsive to wind and waves, but I found it to be easier to control without a rudder than say my similarly sized Stellar ST17 in the fiberglass layup. As a matter of fact, while you can get a rudder, I just didn't bother. It takes longer to install the rudder than to inflate the craft and it's just one more thing to bother with. Not that I am complaining about the rudder, far from it, rather that the boat is plenty controllable without one even in wind and surf. It does go a little this way and that but it's so minor that the extra effort in installing the rudder doesn't seem worth it.

As far as the stability goes I think this is the most stable kayak I have ever paddled. The air gives it a very odd stability because the initial stability is just as much as a recreational or sit on top boat, but it has secondary stability in spades despite the hull being flat like a more basic sit on top design. This is because the air seems to add to the light weight. It wants to float, it doesn't want to get in the water deep enough to roll so there's a third stability past the primary and secondary stability just from the buoyancy thanks to the air. This is one of those try it to believe it as you won't feel it in any other kayak. That said the old adage that stability compromises speed doesn't apply. The speed is quite fast, not just because of the hull stiffness but also the length, and especially how high it sits in the water thanks to the air. You don't feel like you're drawing a whole lot of water, the resistance to paddling feels minimal.

The picture I am trying to weave to the prospective buyer is that this kayak has handling and performance characteristics that don't seem to follow the rules of normal kayaks because the inflatable gives it a different personality, all for the good. This boat rows to the beat of a different drummer.

While the price seems high I think it's not unreasonable when you consider the performance envelope of this boat. Where do you find a boat that is beginner stable yet retains a playful demeanor that remains fairly fast, extremely maneuverable, above average in stiffness and lighter than an equivalently sized carbon fiber design that costs only slightly more than an equivalent plastic kayak? It sounded too good to be true until Grabner came along. It's the real thing, it's that good.

Now don't get me wrong, the Stellar ST17 in their Advantage layup is still faster, more responsive, stiffer, more efficient and more playful and fun. Unfortunately it also costs a whole lot more and it's nowhere near as beginner stable for the family. It also weighs more

The seaworthiness is quite good but this kayak is open topped more like a canoe. You can paddle it either way with one or two bladed paddles but it comes with two bladed traditional kayak paddles. This is worth noting because if you need to use it in rough conditions with big waves while it handles them just fine you'll get some more water inside than with a kayak that has a deck. The freeboard is quite high so it's not as bad as you think but you have to anticipate rough seas. They do sell a spray skirt that you have to install the mounts yourself and it's a few hundred dollars but adds about 12lbs to the design. I didn't feel it necessary, it certainly is somewhat limiting in sea kayaking but then again I don't like going out in rough conditions. Worse comes to worse bringing a bail or two fixed the issue. I think it was originally designed for the Austrians to stuff in the back of their BMW, Audi, Mercedes and Volkswagen station wagons to explore the relatively calm lakes in the alps and rivers with the occasional family trip to Croatia or Italy in the Adriatic. It can do more but you just have to be aware of the limitations.

You can also sit three people here but then it can turn into what they call a divorce boat. What I mean is with two people it feels huge and the paddles don't get in each other's way. If three people are paddling, say dad and the two children, then coordinating your strokes becomes more important. It's not a big deal though and can be mitigated by having the forward two just paddle along no matter what but assigning the rear most paddler, who can see what the other two are doing, to steer so he or she is able to stay out of the front two paddler's ways.

Other extras come such as the repair kit if you want one but I found the rubber to be quite durable. You have to be more careful with this boat than with plastic, but if you treat it like a composite and don't land or launch from the beach and always get in and out with the boat already on the water while avoiding rocks and other sharp things you'll be fine.

I love the Grabner 3 for its unique, vibrant personality, outstanding build quality and ease of transportation. I am slightly disappointed you can't store it all folded up but overall this boat is a delight to paddle. I would think this kayak makes a wonderful choice for people that like to travel a lot and bring their boat, especially when space is at a premium like when you fly or take a bus, or someone looking for a light boat and/or better performance than plastic that doesn't want to spend the money on a composite. For about the same to slightly more than the cost of a plastic double you get something half the weight, somewhat stiffer, much more transportable and less durable. If someone was thinking carbon fiber or kevlar but was balking at the price or the expensive repairs the Grabner boats could make a fantastic light weight option. You sacrifice some stiffness but you're lighter than just about anything else of the same size. The performance is real and taken for what this boat can do, the pricepoint which seems like a ludicrously high outlier for an inflatable, is actually very fair when you consider this boats behavior, handling, low weight, fit, finish, quality and overall capability.