The Shasta is an open cockpit high quality performance tandem. It sports an easy paddling, efficient hull with moderately hard chines midship for additional stability. Multiple seating options allow a Shasta to be paddled as a tandem, with a dog or a child, or simply as a solo kayak. Font and rear bulkheads for safety and hatches for storage surround the 8 foot long cockpit The Infinity Seats add comfort and adjustability for a custom fit. Excellent for family paddling, fishing, picnicking, hauling cargo and just simply having fun!

Read and submit reviews for the Shasta.

Read reviews for the Shasta by Eddyline Kayaks as submitted by your fellow paddlers. All of the reviews are created and written by paddlers like you, so be sure to submit your own review and be part of the community!

This new model from Eddyline…

Submitted by: guest-paddler on 6/25/2010
This new model from Eddyline is a absolute dream come true! Having previously enjoyed two other kayaks of this style and similar dimensions, I desperately sought after a lighter and more refined version of a open cockpit recreational tandem. There are very few kayaks that fall into this category and the Shasta has been the answer to everything I wanted.

It is light, 63lbs including a standard foot controlled rudder! Construction is sleek and durable thermoformed plastic called Carbonlite 2000, which is what all of their boats are made of. Design is superb, shallow vee hull 28" wide, the rudder is extremely simple and utilizes only one line to raise and lower. Everywhere you look, this kayak design has been thought through thoroughly and executed flawlessly. I used to think that Eddyline owners were a little too generous with their reviews, but now I know that they were simply in love with their kayak!

How does it paddle? Just as nicely as you could imagine, speedy,tracks very well, glides effortlessly, more than enough stability. I have paddled her three times and tried both bow and stern positions. Soon I will be going to try it solo, which can be done by moving the rear seat forward and attaching extensions on the rudder cables.

I really cannot say enough to describe every detail... If you are in the market for a versatile tandem do yourself a favor and seek out this model. I have had the pleasure of speaking to one of the owners and one of the sales reps several times and they are the kind of people who make a company great to deal with. 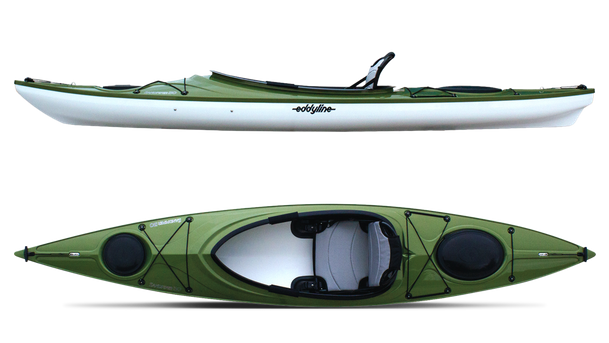