The Suka is a Greenland style design sized especially for smaller paddlers. The shallow "V" hull and hard chines gives a sense of security when carving graceful turns. The Suka accelerates quickly and has excellent cruising speed for effortless days on the water as it displays its performance bred heritage. Skeg, back band, and thigh braces come standard.

Read and submit reviews for the Suka.

Where to Buy the Suka

Read reviews for the Suka by Current Designs Kayaks as submitted by your fellow paddlers. All of the reviews are created and written by paddlers like you, so be sure to submit your own review and be part of the community!

I just bought the Suka in…

Submitted by: paddler770155 on 5/3/2020
I just bought the Suka in fall of 2019 and i've paddled the boat at least 10 times now and i love it. I looked for a new boat for years but most where too big and/or heavy. But the suka is perfect, comfortable, nimble, fast and light (kevlar). I was in a carbon necky Eliza for 15years which was good at the time but cannot compare to my new Suka.
4

Submitted by: jjhall on 1/6/2016
Great little boat! Tracks well even without the skeg, turns on a dime and can take a beating. Don't expect much speed though. The Suka maxes out around 4 to 4.25 mph.
5

I tried many kayaks but when…

Submitted by: guest-paddler on 10/13/2015
I tried many kayaks but when I found the Suka, I knew I was home. That was 5 years ago. I love it. I'm 5'2" and 105 lbs. It's a perfect fit for me and I feel like I'm in control, unlike I did with the larger kayaks. When I rolled it over to see how hard it was to get out with skirt on, and to see how much water it would take on, I was pleasantly surprised. It only took on about a quart of water. Highly recommend!
4

I got into kayaking this…

Submitted by: paddler232890 on 9/17/2008
I got into kayaking this year, and didn't take it lightly. I devoured just about every sea kayaking class I could take, and I've taken out about ten boats that are size specific to smaller people (I'm 5'3 and about 105 pounds). The Suka is, by far, my favorite. It's agile, but not too tippy, and cruises beautifully. I'm not going to go into a million specs because those are easy to look up, but if you're small, and you want an amazing sea kayak, look into this. The only reason I didn't give it a perfect "10" is because I don't feel qualified enough to call anything perfect.
4

I first paddled the Suka…

Submitted by: cecil on 8/2/2007
I first paddled the Suka several months ago at a demo day in Half Moon Bay, California. The fit was perfect. My size is probably the max for this kayak: 5'9" tall and 155 lbs. I think any larger will be a tight fit. Current Designs designed the Suka for 150 lbs. or less. A month passed and I get to try the Suka again in a paddle clinic in Sacramento River. This time about 2-3 hours of paddling.

I rate the Suka way up there on my list....better than the Caribou, Solstice, Capella, Seayak, etc... Why? I like the perfect fit. It feels like I'm one with the kayak. The hard chine makes for a easy turn while leaning to one side. The cockpit is large enough to pull out my legs to dangle on the side. The size is just right for me. Easy to paddle and portage. For super long distance, I use my Nordkapp. And for straight line exercise & speed I'd use my V10-S surfski.

The Suka is new for this year and not too easy to demo, so I seized the chance to Suka-Suka and take her out twice, one week apart. Here are my initial impressions after paddling the Suka in calm lake and channel conditions with mild winds of about 10 mph.

Smaller paddlers now have their version of the much beloved Caribou. The Suka's modified V hull, with a graceful shear and hard chine, carves turns and holds an edge with ease. I'd expect my skills to surge upward w. such a nimble kayak. The layback position aft looks very accessible for rolling, and the front deck is low and cuts wind effect. This is a streamlined kayak - everything she needs, nothing she doesn't. A day hatch for me is not essential as I dislike deck clutter and don't haul a lot of stuff while daytouring.

Turns - nada problema with a Greenland style hull. Turns are accomplished before you finish thinking about it.
Going straight into the wind or with the wind behind me - presto, no skeg.
The skeg like many is on a slider.
The Suka was so efficient for my size that the kayak outfitters were laughing and hollering "Slow up, Deborah, this is a no wake zone!". I sure was smiling. It was like skimming the water, not paddling down through it.

The beam is 21" and not at all tippy. I paddle a 20" beam on my North Shore Fuego. I've come to believe that tippiness is a self-perpetuating state of mind, and that beginners talk themselves out of trying more narrow kayaks. They are missing some great experiences and possibly wasting money on a kayak that is too beamy and bargelike for where they might be in a year, if they choose to progress in the sport.
I could never be bored with the Suka.
This one had a tangerine deck and mango hull (available by custom order)with a coaming also of mango. Quite showy but in a preening birdlike way. The bulkheads were therefore a translucent mango, flush with late sunset glow. The rep commented that CD not only saved some weight there, but also made it easier to see inside the hatches.
The hatches themselves had a car-door style seal, same as my Fuego, which I rely on to stay extremely tight and dry. The Suka's hatch covers are flush to the decks, adding to her sleek profile, and secured by three buckling straps apiece. While the buckling pattern is not intuitive, once mastered it can be done with one (partially gloved) hand. No worries about losing these hatches on the highway or in the water, or during self rescue, no sir.
Deck rigging is full and, with typical CD innovation, a reflective weave is added to make them more visible when light is shined upon them. I paddled in the daytime so could not put this to the test.
I find the thigh braces comfortable and perfectly set up. Again, people who may think they are "too aggressive" may be building this up more in their minds than in actuality. The cockpit goes 29" x 16" with a 12" depth and offers plenty of exit room for an appropriately sized paddler who is comfortable with a wet exit.

I heartily commend the CD Design Team (it was a group effort) for not dumbing down a new entry in the small paddler touring market. This is a full-on miniCaribou for either the male or female paddler who can fit the cockpit and seeks the Greenland feel of a true British seakayak.
Oh the Suka.. the name, according to CD, is from an Inuit word for "swift". Suka also means, in various cultures "sugar", a tropical cocktail, or, in Russian, a female dog (bitch).
I'd call the Suka one sweet, swift bitch. Only reason she's getting a 9 is that I don't own one... yet. 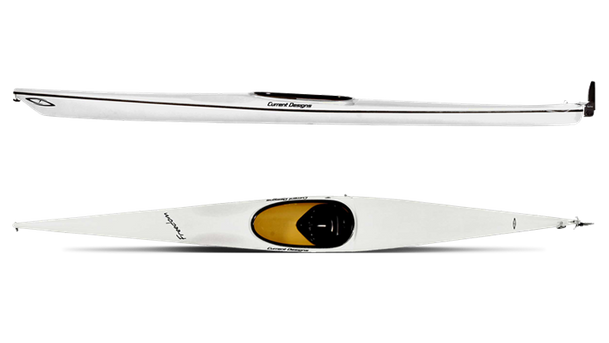 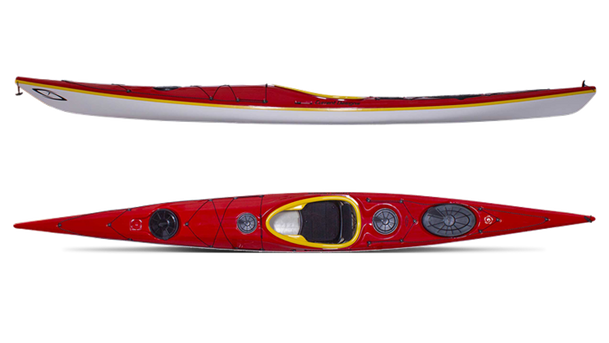