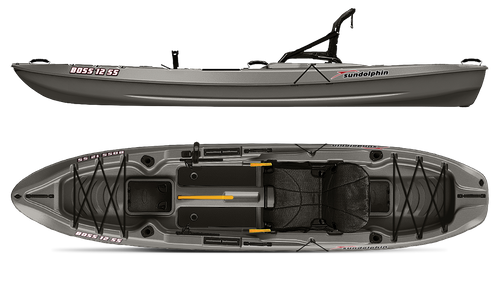 Read and submit reviews for the Boss 12 SS.

Read reviews for the Boss 12 SS by Sun Dolphin as submitted by your fellow paddlers. All of the reviews are created and written by paddlers like you, so be sure to submit your own review and be part of the community!

If I could include the video…

Submitted by: guest-paddler on 1/8/2021
If I could include the video I made that showed the manufacturers defect that caused me to almost sink my kayak and lose all my fishing rods, I would. I like the kayak, but it almost killed me. I’ve spent countless amounts of time trying to figure out how to keep the inside dry. I’ve resealed every attachment and filled the hole the manufacturer drilled that caused my leak. Even after that I still find water inside. As much I I like the kayak. I would never suggest for anyone to buy it. It’ll stress you out, and you’ll spend additional time and money trying to get it to stop leaking. Not worth it
2

I purchased my Boss back in…

Submitted by: USN978 on 8/23/2020
I purchased my Boss back in July 2019 and it has been nothing but issues. 1. The seat design and placement on the kayak are poor and weak. When the kayak gets heated up from the sun, the plastic gets soft and the seat will fall to the lower seat position. I currently use a tie-down strap to wrap around the kayak to prevent the seat from falling. 2. The plastic on the kayak is very thin. I hit a rock on my second time out and the rock sliced a 2 in gash into the hull. I fixed it by using a cut up 5 gal bucket and melted the plastic onto the kayak and placed additional plastic on weak spots I found on the kayak to give better hull integrity. 3. The seat does sit too low and needs to be brought up at least 2 inches. 4. The front pole rod holders sits too far forward to reach while in a sitting position. 5. Two-rod holders in the back have the poles pointing outwards and when you complete a backcast, you will get caught up on the poles.
4

Submitted by: paddler793732 on 6/8/2020
Works great for fishing two reasons not a five star review first is rod holder location needs to be closer to seat design . Second is the caps on seat want to pop out and let's seat slip in cradle. These are nit picking . It's a great kayak for the money
4

This is a great kayak for the…

This is a great kayak for the money. It is made of a thin plastic, however it is loaded with features mostly seen in premium priced products. The seat is where you'll be the most pleased as it is very comfortable. I know some have had issues with the seat but i have been able to replicate that problem even in the heat of Ca. Great entry level kayak!!

Just picked up the Ozark…

Just picked up the Ozark Trail version of the Boss 12 SS kayak ($499 Walmart) and spent a few days putting it through the paces on the lake.

What I like: It's stable in waves, and stable enough on calm water to stand up and move around safely. I've only had it out on the water for about 10 hours so far, but it seems to track nicely, although it's not as fast as a touring kayak. I like the hatch doors; they are big enough to let me store larger items like my rod holders, large waterproof containers, etc. I think the seat is remarkably comfortable. I also like the rails installed on each side, which allow for YakAttack pole holders to be mounted and re-positioned. I bought two Omega Pro holders, which work very well and stay out of the way. Also, the camouflage pattern is very nice, which differs from the Boss version.

Lastly, I love how the seat folds all the way down flat, rests fully inside the kayak when laid down, and has a bungie and hook position to keep the seat laid flat during transport. Excellent!

What I dislike: The 1/4" scupper holes are not adequate. I think the hole could be drilled wider to almost an inch. The scupper channel is large, but they just used a tiny drill bit to make small holes. But more than the small hole, the problem is this larger kayak has only 4 scupper holes. My smaller 10' kayak from Lifetime has six scupper holes. With only 4 tiny holes, the water doesn't drain quickly, the holes get clogged easily, makes annoying noises when paddling, and water tends to gather in the back if it's not perfectly level. When I got back to shore I had several gallons of water collected in the rear of the kayak where there should have been some scupper holes. Seriously bad design. Get a pump or sponge! Only 4 scuppers would have been a deal breaker for me if I'd have noticed it before I bought it.

Another problem is the paddle holders, they were loose and several screws weren't even in the plastic. A lot of water got inside the kayak just paddling around the lake from water dripping off the paddle. I had to unscrew everything, put on some marine goo sealer, drill new holes, and remount the paddle holders. Same with the seat, one of the four bolts was completely stripped and loose.

Also, the plastic feels softer than my Lifetime kayaks. I'd use bolts with lock-nuts, not simple screws, on everything.

The one pole holder that comes with the kayak is positioned right at the end of the foot peg, so if you are tall and put the peg all the way to the end of the rail, the pole holder hits your foot. No big deal if you use YakAttack holders mounted on the rails.

Another problem is the cheapness of the seat side buckles. The buckles that let you adjust the seat position are really brittle and cheap plastic. I leaned back on my seat to reach over to my cooler behind the seat and one of the seat buckles just shattered. I replaced them with metal buckles, which is easy to do as the strap is simply bolted to the seat frame. I just unscrewed the bolt, folded over the tip of a 1" black strap with metal buckle cut to the proper length, solidified the end with super glue (rather than stitching) drilled a hole in it, and remounted it to the seat. Now I have metal buckles.

Other than that, it's a pretty cool stand-up kayak design. I love the larger hinged bay doors, and the convenient bags.

Best part about this kayak is the $499 price. For a stand-up 12 foot kayak, that's a pretty reasonable deal. I probably wouldn't have bought it, but I loved the camouflage color scheme and seat. I've added a waterproof zipper bag behind the seat and am installing a kayak stand-n-cast rail built from a cheap walker to help while standing.

The Sun Dolphin Boss 12 SS is…

The Sun Dolphin Boss 12 SS is manufactured by KL Outdoors. The price fluctuates, but I was able to get it for $397 at Walmart. It is now being sold as the Ozark Trail Pro Angler 12 and includes a paddle.

Plastic: The plastic is on the softer side, and when it heats up it does move more than one would like. For example I indented it when using the sides to support myself as I stood up. I was able to squeeze the side and it did return to the desired shape. I've installed two 2' sections of aluminium t-track on the sides which has given it additional support.

Seals: The seals on the hatches aren't waterproof. I don't get enough water to impact stability, but enough to get contents that are resting on the hull floor to get damp.

Side Handles: The side handles rubber mounting turn to an angle that is not cosmetically pleasing when used to car-top, but they still work.

Seat: The seat is comfortable. I use it in the low position, and have been out about 20 times...as long as 8 hours on one day...

Hatches: All hatches are accessible while underway.

Stability: I'm 6' and about 200 lbs. I am able to stand and fish, but only do it in calm weather. I prefer the seated position, especially when out in the bay. It had some nice tests in both wind, and wakes from boats while out in the Lakes Bay area near Margate.

Layout: Plenty of open area. With its substantial weight capacity you'll have plenty of options. Price: The features at this price point are brilliant.

I love this thing! I have not…

I love this thing! I have not really givin it a full true amount of time on the water because of the weather here in Indiana. I took it to a local creek in freezing weather to give it about 15 minutes of my time. Getting in and out of it is a breeze and standing up was easy for an overweight middle aged man ( I’m 51 and weigh 240) this thing is very stable and I prefer the higher position of the seat. It seems to be a solid made boat also. I can’t wait to take it down that creek for an all day excursion fishing for smallmouth bass! Fish on!