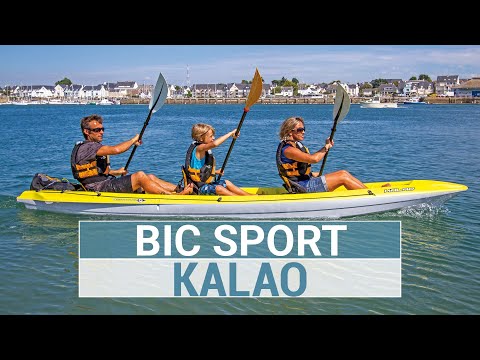 The Kalao is quite the 4x4 of the kayak world. Equally at ease on the sea, rivers or for fun, it really is the kayak for all adventures. Like all BIC Sport kayaks it features plenty of innovations. The fluid, stable hull design makes it simple for a family of two adults and two children to all ride together in complete comfort. That makes it the first true 3 (adults) person Sit-On-Top on the market, with 3 proper ergonomic seats. Essentially, the Kalao combines capacity of the old style family canoe, with the safety of a Sit-On-Top kayak! The other big first: it can be adapted to take an electric motor. The largely flat hull design with very little water draught is extremely stable and allows the kayak to go almost anywhere. Such aspects as storing your belongings while kayaking, as well as carrying and transporting your kayak have all also received detailed attention. One other important point: it’s unsinkable.

Read and submit reviews for the Kalao.

Where to Buy the Kalao

Read reviews for the Kalao by BIC Sport as submitted by your fellow paddlers. All of the reviews are created and written by paddlers like you, so be sure to submit your own review and be part of the community!

Submitted by: Anonymous on 8/1/2011
I bought the Kalao 2 years ago and have used it here in New Zealand with my 3 kids (14,12 and 10) It's been great, exploring inland coastal areas and kayak fishing, also using it as a platform for diving off. I attached a mercury 2.5 outboard by attaching deck planks to the rear molded handles area and using U bolts, then building up a little transom on back made so much easier by the square end. The kayak flies along and planes very nicely and its weight and stability are still excellent even when there are just 2 of us with the outboard going full throttle!

The Kalao is easily the best investment I have ever made. I transport it on my Mazda 626/Capella and it sits on top (inverted) and is very stable. I also move it around with a trailer when I am on my own and launch it straight into the water. Manhandling 87 lbs. from the roof of a car is difficult if I am on my own.
Great product, super stable and given us so much fun!

I liked the look and Idea...

Submitted by: Anonymous on 8/4/2010
I liked the look and Idea of the Kalao so purchased one thought it would be quite a good thing to do with the kids.
Used 1st in Sept 09 went up the river Thames was good fun with one major exception - the rear seat has a design flaw - after couple of hours noticed water in back seat does not run out as it is meant to do so you sit in a permanent pool of water as if you were rowing a half sunken boat(rear seat only) this being due to the base of the seat being lower than the scuppers that are supposed to drain it so no one will travel in the rear seat making it only suitable as a two seater. BIC's customer service is poor beyond belief, they suggested that I purchased rubber bungs to put in the scuppers - Unbelievable, but 100% true. I sent photos of the problem they then suggested water was getting in the hull and sitting at the back only. This was not the case as I opened the drain hole and not a drop came out. So I believe your better off buying a two seater and avoid BIC completely. Having said all that it could be good if they re-design the rear seat in line with middle and front.

The Kalao is my third...

Submitted by: Anonymous on 6/14/2010
The Kalao is my third kayak, I have a Pelican double and a Islander Colada, and I can assure that the Kalao is the best kayak I've had. I use it with my wife and two children and is very fast and stable. While I rowing, my wife (5 "3 and 110 pounds) can stand without fear. I live on an island so I use it at sea a lot of time and is a litter bit difficult to keep sailing in a straight line, but over time it can be dominate. It cost me $500.00 used so I think it's the best investing that I had. It is very comfortable and spacious, my children used as a springboard the back side and can carry heavy loads.

Submitted by: Anonymous on 4/17/2010
I hope you find this review helpful. When shopping for our first kayak, user reviews for the BIC Sport Kalao were nowhere to be found (apart from a one or two sentence review at REI I believe).

I'll qualify this review by saying that this is our first ever kayak and only the second one we've used. The other was a test drive of a friend's tandem Dagger sit-in.

Initial Impressions:
This is totally subjective, but I think the Kalao is WAY cool looking. Okay, maybe it doesn't look like a 75', pencil-thin, $25,000 sea kayak made to circumnavigate the globe...but it does look nice.

We wanted a tandem with the capacity for an extra kid. Another model that was available locally was the Perception Tribe 13.5. While that model will accommodate 3, it just looked like a chubby donut on the water. I didn't want my kayak to look like a rental and that's how I thought the Perception looked.

The other first impression is that this kayak is BIG. It looks big and is heavy...not inappropriately heavy...just a long sit-on-top so it's weight will refelct that.

Car Topping:
I was surprised how well it car-topped on our Honda Pilot with stock bars. I'm not sure what I expected, but it did really well. I didn't want to fork over $46 for bar pads and bought our Kalao off of Craigslist so needed padding there right away. Two old beach towels and some duck tape did the trick.

We put it on hull-up (upside down) and tied off like we're supposed to...to the front and rear bumper and to both racks. Holy cow that sucker was stable. 70 mph for 3 hours and it barely budged.

On Water:
We've only been out on it once, but it went really well. The two most immediately noticeable differences between the tandem Dagger sit-in and the Kalao were that the Kalao was harder to get moving and didn't track as well.

This wasn't by a huge margin though. Plus we had the Dagger in flatter water and no wind. So, yes we did have to work a little harder to keep the Kalao on a straight track and it was a little more work to get it and keep it moving. But hey, it's heavier, holds 2 more people, and it's good exercise anyway.

Other Good Stuff:
We have the factory clip-on seats and they worked well, but some of the hardware is starting to rust. Not a huge deal though...I think when they're too far gone, I'll just cut them off and use carabiner clips.

If you look at the Fishing version of the Kalao, you'll notice that there are 8 round hatches in front of the bow and stern seats. In the non-fishing model which we have, the sealing lip is molded in there, but the hole wasn't molded in so they just put a rubber pad there. I'm going to just buy a rubber hatch cover that will fit and cut out the opening. I called BIC in the US and they wanted $35 for each cover (plus about 3 weeks because they weren't in stock), but they were very nice and said that aftermarket hatch covers will work fine.

Motor Option:
The guy we bought the Kalao from was a pretty crafty guy. He rigged up a really cool motor mount for the back. The back of the Kalao has a very flat "pad" and he fabricated a stout L-shaped wooden fixture that clamps very securely to the boat with no drilling or modification. He ran a 27 lb Mercury 2.5 Hp motor (which we also bought from him). Haven't tested that combo on-water yet, but the setup looks awesome...WAY, WAY better than the factory motor mount that you can buy.

Wetness (or lack thereof):
Being a sit-on-top, I knew we'd be sitting in a puddle all the time...but surprisingly we weren't. We aren't overly heavy at 160# and my wife at 110#, but we stayed butt-dry (mostly). I took WAY more water in from slinging the paddles than the little amount that came up the scupper tubes (my wife thinks I made that name up). I'll find the right size plugs and close them up.

My Complaints:
Since any good review should details some negatives (nothing's perfect), here are mine.
First, as was with the Dagger we tried, there is a clip point that's "conveniently" located where my hands pass over the boat when paddling from the stern seat. My right hand is all bloody from banging into it. I'm not sure if I'll try to pad it somehow or just learn to paddle above it, but that annoyed the heck out of me. But with the Kalao, at least it was a less "aggressive" protrusion than the very appropriately-named Dagger had (right hand was much bloodier that day). The aforementioned rusty clips were also a disappointment, but easily fixable.

Would have rathered that the Kalao be easier to paddle and track straighter, but I would have also rathered that it have $1,000,000 taped to it when I bought it. Can't have everything, right? We wanted a cool looking kayak for a fair price that held all of us.

Overall, I'm super thrilled with the Kalao. I'll try to post some pictures with a link to the motor and mount, the seat clip issue, the offending hand-banger, etc.